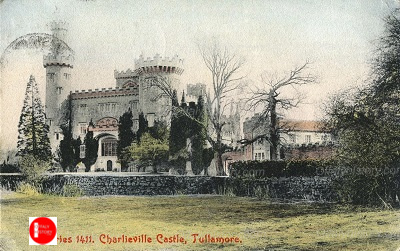 Charles William Francis Bury, the fourth Earl of Charleville, came of age on the 16th of May 1873. Celebrations were delayed to the end of May so as to confine the party and the guests staying at the castle to one week and ending with the marriage of the earl’s sister to Captain Edmund Hutton on 5 June 1873. As stated in article no. 5 in this series the young earl died in New York on 3 November 1874 without marrying and was succeeded as fifth earl by his uncle Alfred. The latter died childless on 28 June 1875 and so the Charleville title died with him. The fourth earl’s sister, Lady Emily, succeeded to the estate while yet a minor. She married in 1881 but was a widow by 1885. Lady Emily died in 1931 having spent much of her widowed life abroad and was succeeded by her only surviving child Lt Col. Howard Bury (died 1963 aged 80). He inherited Belvedere, Mullingar from his cousin Brinsley Marlay in 1912 and sold the contents of Charleville Castle in 1948. As Lt Colonel Bury died childless the estate went back up the line to the children of Lady Katherine Hutton née Bury (died 1901). The celebrations of 1873 were poignant and the speeches full of irony. That the family had an excellent relationship with the Tullamore townspeople is clear from the speech of the parish priest Fr McAlroy who had succeeded O’Rafferty in 1857. Alas so little material has survived by way of letters or diaries of the speech makers of that exciting week in the history of Tullamore. As noted in the no. 5 blog the original address of Dr Moorhead on behalf of the town commissioners was donated by Professor Brian Walker to Offaly History. The late Brigadier Magan donated an important photograph of the 1873 wedding and pictures of the Hastings of Sharavogue in what we now call the Biddulph Collection in Offaly Archive.

END_OF_DOCUMENT_TOKEN_TO_BE_REPLACED

Tullamore is a well-preserved town and is the county town of Offaly since an act of parliament in 1832 displaced Philipstown (Daingean) which had been the county town since the shiring of Offaly as part of the new colonial government policies in 1557. The new county to be known as King’s County was then comprised of the baronies reflecting the Gaelic lordships of the O’Connors and that of the O Dempseys. The king in question was none other than Philip II of Spain married at that time to the tragic Queen Mary of England (1553–58) hence the new forts of Philipstown and Maryborough (Portlaoise). The county was extended about 1570 to include the territory of the O Molloys (now to be the baronies of Ballycowan, Ballyboy and Eglish) and also that of the Foxes in Kilcoursey and the MacCoghlans in what would be called Garrycastle. In 1605 the territory of the O Carrolls (to form the baronies of Ballybritt and Clonlisk) was added, as also was the parish of Clonmacnoise (1638) at the behest of Terence Coghlan of Kilcolgan. Those looking for an exciting seventeenth-century history for Tullamore will be disappointed as the surviving evidence of town growth in that troubled century is thin. This week we continue to series to mark the 400th anniversary of Tullamore as a town.

END_OF_DOCUMENT_TOKEN_TO_BE_REPLACED

When renowned Offaly archaeologist Caimin O’Brien, cited Sir Edmund Spenser’s inclusion of a verse on Croghan Hill in his most famous poem, The Faerie Queene, in Stories from a Sacred Landscape: from Croghan Hill to Clonmacnoise; the curiosity bells began to ring.  This was an amazing revelation and posed questions as to how Spenser was familiar with Croghan Hill and its religious history? Had he visited the area? When did he visit? What were the circumstances pertaining to his visit? And latterly, the question arose as to whether it was possible that this visit influenced him in some distinctive way? And furthermore, whether that influence was positive or negative?

END_OF_DOCUMENT_TOKEN_TO_BE_REPLACED

We welcome this week Dr Diarmuid Wheeler on an important subject for Ireland and for the midlands, being the colonial experiment known as the Leix-Offaly Plantation. For those interested in the Decade of the Centenaries, the resurgence of interest in the Irish language, 1916 and the War of Independence, knowing the roots of the conflict is essential. The fort of Philipstown would soon be adopted as the county town for the new King’s County of the 1550s. The courts of assize to display the might and power of English law continued to be held in King’s County until 1921 while the name of the county was changed only in 1920 to Offaly. The Civil War of 1922–3 would witness the burning of houses such as Ballyburly, owned by the Wakely family, who had come to Ireland as soldier settlers in the time of Elizabeth.

Dr Wheeler will give his lecture on the Leix-Offaly Plantation to Offaly History from his home in the United States on Monday night 22 March at 7.30 p.m. Email us at info@offalyhistory.com with the subject heading  ‘Zoom Wheeler’ for the access code [Ed.]

The beginnings of the midlands colonial project can be traced back to the early sixteenth century when the Tudor government, who firmly believed that Ireland rightfully belonged to the English crown and that the country’s keeping was essential to England’s overall safety, sought to restore the island to its twelfth century “conquered” state from which the crown hoped to profit. Brendan Bradshaw argues that the Tudors and the Old English of Ireland were heavily influenced by Renaissance humanism that encouraged them to bring reform to Ireland. But the administration lacked significant knowledge and experience of the country, particularly during Henry VIII’s reign and quickly realised that reforming the island would take significantly more military and financial resources than they had anticipated. By the final years of the 1530s, it was apparent that a certain degree of coercion and military force would be necessary to bring about wide scale reform. Yet the Tudors were also aware that they could not employ outright force to achieve their objectives, lacking the necessary resources to do so. Instead, the Tudor administration recognised that they would need to accommodate the natives of Ireland, at least somewhat, in order to make their aspiration a reality.

END_OF_DOCUMENT_TOKEN_TO_BE_REPLACED

Now that we are all locked down in our various counties I miss my occasional trips to Offaly to visit old friends. I keep an eye on local news on line and love the Tullamore Tribune and the Offaly Express. I was dismayed the other day to see a report on the Express that Offaly ranked lowest in Ireland on a Liveability Index! What in the name of Heaven is a Liveability Index!! I decided to look into it all a little further. Seemingly a father and son (with obviously too much time on their hands!) decided to rate every county in Ireland on four (4!!) parameters. One criterion was natural amenity which they assessed by developing ‘a unique method of ranking the natural amenity of a particular area using the percentage of each area covered by water and mountains and attributed as urban’ (Leinster Express 16 Jan 2021 Lynda Kiernan). Having spent so many happy years in Offaly I would certainly disagree with the findings and would challenge that duo to explain them fully! The very fact that Offaly is not covered with water and mountain makes it one of the most attractive counties in Ireland. Offaly’s unique landscape is one of peace and tranquility. The wide open stretches of bog covered with the most wonderful heathers and gorse throughout the year make it a joy to behold in any season. A mid 19th century saying that when gorse is out of bloom, kissing is out of season is certainly true of midland scenery!

END_OF_DOCUMENT_TOKEN_TO_BE_REPLACED

On the eve of the Great Famine in 1845 the backwardness of Irish agriculture was seen by many as the reason for much of the country’s economic woes. About Irish farmers, it was stated that they knew nothing of the ‘English’ method of farming or indeed welcomed its arrival. However, there was amongst many Irish landlords, and their agents, a growing understanding of the benefits of the ‘science’ of agriculture and many had willingly adopted such methods in the management of their estates. In particular, many land agents were the leading pioneers of better agricultural practice. The employment of agriculturalists; the establishment of agricultural societies and the trips undertaken to observe foreign models of agriculture all highlight the progression of Irish agriculture by the early 1840s.

END_OF_DOCUMENT_TOKEN_TO_BE_REPLACED

The architect and town planner Frank Gibney (1905-1978) is today recognised as one of the most talented, influential and prolific housing designers of mid-20th c. Ireland.

Responsible for almost six thousand local authority dwellings in every part of the country, his deep concern for human scale and for good living standards delivered homes of a quality which have stood the test of time, while today many of their contemporaries have been altered or demolished.

Principal amongst his many achievements are the six Midland bog villages built in the 1950s for Bord na Mona workers, which were inspired by the aspirations of Patrick Pearse and Eamon de Valera for national self-sufficiency and which have been described by the Yale University Press/Royal Irish Academy volume on Irish architecture as ‘models for rural living’. These beautiful urban set pieces are  cherished by their proud present day inhabitants and beg the question as to why contemporary housing policies have not emulated their success.

Gibney’s numerous and extraordinarily ambitious town planning schemes founded on Garden City and Beaux Arts principles, were less successful, being proposed at a time of cultural conservatism and financial stringency. His passion for plans based on aesthetic principles which would preserve the best of towns while creating new and beautiful public areas found little local response. Nonetheless, he was engaged by many Irish towns and cities including Waterford and Drogheda to chart their future and elements of his proposals are still capable of fulfilment today.

END_OF_DOCUMENT_TOKEN_TO_BE_REPLACED

During the early Christian period the midlands region was covered with great oak forests and vast expanses of bogland left over from the last ice age.  Transport was only possible on glacial ridges or eskers and important monasteries had been built along these trackways.  The most famous of these roadways was the Eiscir Riada which runs westward across the northern edge of Co Offaly on its way between Tara and Clonmacnoise which was always a significant Shannon crossing point into Connacht.  A second great roadway connected Tara to north Munster; this was referred to as the Slighe Dhála and runs through the southern part of Co Offaly.  There was a connecting link between both of these main roadways by a North South running corridor on which a number of additional monasteries were built. END_OF_DOCUMENT_TOKEN_TO_BE_REPLACED

On June 15th 1991, I climbed a locked gate marked Bloomville, just as the rain stopped and the sun came out.  There were some lovely beeches, but no sign of a house. I then spotted two ancient chestnuts, and it was only then that I could see the house in the distance.

It was a case of love at first sight, with everything sparkling in the sunshine, and I wondered why the agent’s advertisement had not included a photograph.  Only when I approached the house could I understand the reason.  The traditional roses (still flourishing 29 years later) looked pretty, but, close up, the house looked very neglected.