A big welcome to Martin Moore this week as a new contributor to Offaly History blog and with a new topic. A big thanks also for the work of the sports historians in the county including the late John McKenna on association football in Tullamore in the 20th century. Martin is preparing an article for Offaly Heritage 12 (forthcoming later in the year).

Recent research into the origins of association football in Ireland has demonstrated that Offaly was – for a brief period – a centre of early soccer activity, involving one of the first soccer teams in Ireland. The traditional understanding is that soccer was consciously ‘introduced’ to Belfast in 1878, from where the game eventually spread around the rest of the island. The real story, however, is not quite so straightforward. We now know that soccer was played in other parts of Ireland before 1878 and Offaly, Tipperary and Sligo were centres where the code was played in the late 1870s and early 1880s, though it failed to take root and was not sustained.

As early as December 1877, three football matches were played in the Tullamore area, which were almost certainly either played under association rules or rules that were a compromise with soccer. The first was a twelve-a-side match played at St Stanislaus’ College, Tullabeg, on Saturday 8th December, when a team from the college defeated a team from Tullamore by five goals to nil. The second was played eleven-a-side on Friday 14th December when the Tullamore team visited Geashill and defeated the villagers 4–2. The third match, on Thursday 27th December, reportedly played in front of more than seven hundred spectators at Tullamore, was a no-score draw between a ‘Tullamore XV’ and a ‘Mr Thomasson’s XV’ that was drawn at least in part from the Geashill team.

END_OF_DOCUMENT_TOKEN_TO_BE_REPLACED

Schooling in Ireland: a clustered history 1695-1912. by John Stocks Powell. Published by Offaly History (2020) , 364 pp in softback and limited run of 50 only for sale in hard covers €28. Offaly History Centre, Whelehans in Portarlington and Midland Books, Tullamore.

The cluster is Portarlington, and now appears in book form, published by Esker Press for Offaly History in Tullamore. It should be remembered that Portarlington is as much in Co. Offaly as in Co. Laois; and in this history of schools the exact locations revealed more on the Offaly side than the Laois.

The early schools of Portarlington have so often been seen as a follow-on to the Huguenots, and more or less left at that.  This book shows the school history to have surpassed the Huguenots both it time span, and in importance: so many eighteenth and nineteenth century printed sources wrote of the schools as significant, and not the French.  Indeed the 1803 Post Chaise Companion for Ireland ignore the French and cite ‘several schools in great repute’.

END_OF_DOCUMENT_TOKEN_TO_BE_REPLACED

How many Offaly people have emigrated? They have stories we would like to hear and to archive for Offaly History Centre. This is some of Michael Kelly’s story. You have one too, whether living at home or abroad. So sit down and start writing. The words will flow. Thanks to Michael Kelly SJ for this report. He appears on a postage stamp and is an honorary citizen of Zambia and of Tullamore. We will add this latest report to the almost 250 stories we hold from Offaly people who wrote it down or talked to us. Like our offalyhistoryblog to receive it free every week and sometimes twice a week. Almost 70,000 views so far this year

ON MONDAY, August 22, 1955, a young Irish Jesuit stepped off a plane at the City Airport (which is now a Zambia Airforce base in Longacres). It was his first visit to Africa, and he fell in love with it. He talks about the cheerfulness, generosity and openness of the Zambian people, as well as their suffering. A mathematics genius, he dedicated his life to educating young Zambians, and later to the fight against HIV and AIDS. Sixty-five years later, Father Michael Kelly says he is now looking forward to going home. And by “home”, he is not referring to his native country – Ireland – but to Heaven.

END_OF_DOCUMENT_TOKEN_TO_BE_REPLACED 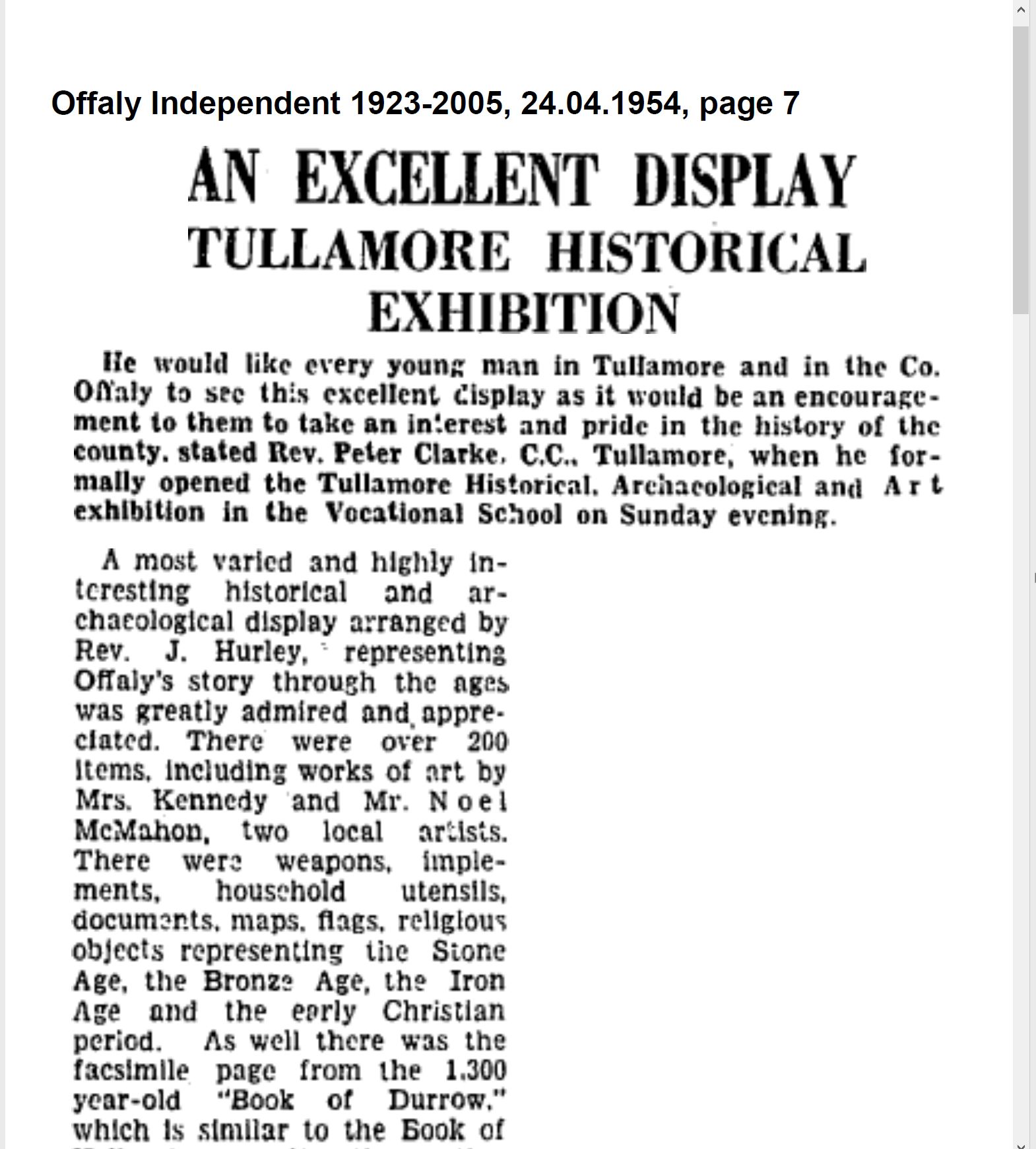 Consumed by political and economic turmoil, the first half of the 20th century was a fallow period for the visual arts and archaeological scholarship in Ireland and certainly Offaly was no different. The post-war period dominated by scarcity and emigration, was particularly stifling.

The first glimmerings of change came with the national festival of An Tóstal in 1953. Emulating the very successful Festival of Britain two years earlier, its primary intention was to boost tourism in the Easter off peak period – or as the poet Patrick Kavanagh called it ‘The Monsoon Season’.

Whether or not the festival brought any tourists to Ireland or not is debatable but it certainly had a dynamic cultural impact, particularly outside of Dublin. Local societies emerged to organise exhibitions of arts, crafts and heritage. An awareness of the need for civic improvements led to the Tidy Towns movement. Most importantly, a spirit of optimism and openness was created.

This sense of a new beginning was particularly evident in Tullamore where a small local elite led by individuals with connections to the Dublin art and theatrical world were beginning to promote a more open and less traditional approach.

END_OF_DOCUMENT_TOKEN_TO_BE_REPLACED

The contemporary arts scene in Ireland from the 1940s to the 1970s and to a certain degree in Offaly also, was dominated by the friendship between the architect Michael Scott and the Jesuit priest Fr. Donal O’Sullivan. Both Scott and O’Sullivan were close friends of Desmond Williams, the managing director of Irish Mist and a director of Williams’s whose commercial interests extended beyond the famous whiskey brand to a chain of grocery shops and pubs in Offaly and Westmeath. Williams and his wife Brenda, whose father Oliver St John Gogarty had been an early supporter of the painter Jack B. Yeats, owned many superb works by the artist.

END_OF_DOCUMENT_TOKEN_TO_BE_REPLACED

We are bringing you a special Easter Sunday blog to celebrate the work of Fr Michael Kelly, the Tullamore man who appears on a new Irish stamp marking the work of emigrants and providing his personal reflection at this time. Fr Kelly has been in the Jesuit ministry for 65 years working in Zambia. His family lived in O’Connor Square and his father was a director of P. & H. Egan, Tullamore. Two of his brothers were also with the Jesuits. Fr Michael writes of the current virus difficulties and reflects on his time growing up in Tullamore. END_OF_DOCUMENT_TOKEN_TO_BE_REPLACED

Offaly Archives is pleased to announce the publication of the catalogue of the Papers of St Stanislaus College, Tullabeg, the result of a collaboration with the Irish Jesuit Archives, Leeson St, Dublin, where the papers are permanently housed. This blog outlines the history of the college at Tullabeg, the scope of what is contained in the archives and how to access the online catalogue.

The Jesuit community at Tullabeg (St Stanislaus College), Offaly was established in 1818, four years after they were restored as an order. Tullabeg was initially intended to function as a novitiate (training centre for Irish Jesuits) and a suitable site was offered in 1815 by Ms Marie O’Brien (1765-1827), of Rahan Lodge. She had also helped the Presentation Sisters establish a convent nearby at Killina. When the Tullabeg building was complete, the idea of novitiate was abandoned and the new foundation served as a feeder school for Clongowes Wood College, Kildare. Tullabeg rarely counted more than forty pupils, all of them below early teens and the pace of life was unhurried. Drama, debates and sport (gravel football and cricket) were encouraged, and facilities followed. The appointment of Fr William Delany SJ (1835-1924) as rector, transformed the College educationally. Pupils were matriculated and examined successfully for BA degrees at the University of London, and later at the Jesuit-run University College, Dublin.