The Homan Potterton sale on 7 September 2021 at Adam’s, Dublin features three painters with Offaly connections. But first a word about Potterton. After secondary education at Kilkenny College and Mountjoy School he began studying to be a solicitor, but (great for him ) he switched to art history at Trinity with the formidable Anne Crookshank. He was the youngest director of the National Gallery of Ireland ever appointed (1979) but stayed for only eight years. He retired in 1988 out of frustration with the bureaucracy, the bullying Charlie Haughey, and his being unable to secure much needed funds for the gallery. That was back in the difficult 1980s. Had Potterton remained he would have been able to oversee the wonderful gallery there is today. All the great institutions saw money flow in from the 1990s with the support of EC funds and the lift in the economy from 1993. While he took over the editorship of the Irish Arts Review in the 1990s (then an exciting annual event) he later moved to France and we heard no more of him save for several family histories, a memoir and a novel.

END_OF_DOCUMENT_TOKEN_TO_BE_REPLACED

The grand jury system in Ireland was a precursor to the county council or local authority system we know today, and the records generated by the grand jury and its offices reveal the history of towns, cities and boroughs all over Ireland. Unfortunately this body of records suffered significant losses during the twentieth century. On 25 May 2021, Beyond2022:Virtual Record Treasury of Ireland in association with Local Authority Archivists and Records Managers (LGARM) hosted a research showcase to mark the centenary of the burning of the Custom House during the War of Independence, an event which resulted in the destruction of the archive of the Local Government Board for Ireland.  This event was echoed just over a year later with the destruction of the Public Record Office of Ireland at the beginning of the Civil War and whose losses in terms of documentary destruction is being valiantly and virtually rebuilt by the Beyond2022 team. The top floor of the PRO was where the grand jury records from all over the country were kept and ultimately perished during that terrible fire. Between the fire in the Custom House and the more well known 1922 PRO(I) fire, vast quantities of records relating to local government were destroyed.

END_OF_DOCUMENT_TOKEN_TO_BE_REPLACED

Many readers and their parents will have great recollections of the dancing scene in Ireland. You can help write the history. Share your thoughts and send on the stories needed to build a picture of the dancing scene in Ireland. Many will recall Je t’aime played in the 1960s in St Mary’s Hall, or the Harriers, Tullamore. But what about the County Ballroom and the parish halls in Clara, Birr, Rahan, Killeigh and so many more. Did dancing bring about the ‘ruin of virtue’?

Dancing has always been a source of expression, fun and entertainment in Ireland.  People danced at the crossroads, in each other’s houses, at social events, festivals, and in licensed dancehalls all around the country.  From the early twentieth century the Catholic hierarchy became particularly concerned with the opportunities that might arise for sexual immorality in dancehalls.  In October 1925 the bishops and archbishops of Ireland issued a statement which was to be read at ‘the principal masses, in all churches on the first Sunday of each quarter of the ecclesiastical year.’ The statement referred to the ‘evils of dancing’ and it was ‘a grave and solemn warning to the people with regard to the spiritual dangers associated with dancing’.  The statement noted: ‘We know too well the fruit of these [dance] halls all over the country. It is nothing new, alas, to find Irish girls now and then brought to shame, and retiring to the refuge of institutions or the dens of great cities. But dancing halls, more especially, in the general uncontrol of recent years, have deplorably aggravated the ruin of virtue due to ordinary human weakness. They have brought many a good innocent girl into sin, shame and scandal, and set her unwary feet on the road that leads to perdition’.  The behaviour of the men did not elicit much comment. From the mid-1920s and throughout the early 1930s there were constant references in the newspapers to the problems of dancehalls and motor cars.  In 1931 Cardinal McRory combined the two and saw a growing evil in ‘the parking of cars close to dancehalls in badly lighted village streets or on dark country roads.  Cars so placed are used … by young people for sitting out in the intervals between dances’.  ‘Joy-riding’ had a very different connotation in the period than it does now.  Reporting on a sermon by the bishop of Galway, the Irish Independent noted that ‘joy-riding’ was conducted by ‘Evil men – demons in human form come from outside the parish and outside the city – to indulge in this practice.  They lure girls from the town to go for motor drives into the country, and you know what happens… it is not for the benefit of the motor drive.  It is for something infinitely worse’.

END_OF_DOCUMENT_TOKEN_TO_BE_REPLACED

The architect and town planner Frank Gibney (1905-1978) is today recognised as one of the most talented, influential and prolific housing designers of mid-20th c. Ireland.

Responsible for almost six thousand local authority dwellings in every part of the country, his deep concern for human scale and for good living standards delivered homes of a quality which have stood the test of time, while today many of their contemporaries have been altered or demolished.

Principal amongst his many achievements are the six Midland bog villages built in the 1950s for Bord na Mona workers, which were inspired by the aspirations of Patrick Pearse and Eamon de Valera for national self-sufficiency and which have been described by the Yale University Press/Royal Irish Academy volume on Irish architecture as ‘models for rural living’. These beautiful urban set pieces are  cherished by their proud present day inhabitants and beg the question as to why contemporary housing policies have not emulated their success.

Gibney’s numerous and extraordinarily ambitious town planning schemes founded on Garden City and Beaux Arts principles, were less successful, being proposed at a time of cultural conservatism and financial stringency. His passion for plans based on aesthetic principles which would preserve the best of towns while creating new and beautiful public areas found little local response. Nonetheless, he was engaged by many Irish towns and cities including Waterford and Drogheda to chart their future and elements of his proposals are still capable of fulfilment today.

END_OF_DOCUMENT_TOKEN_TO_BE_REPLACED 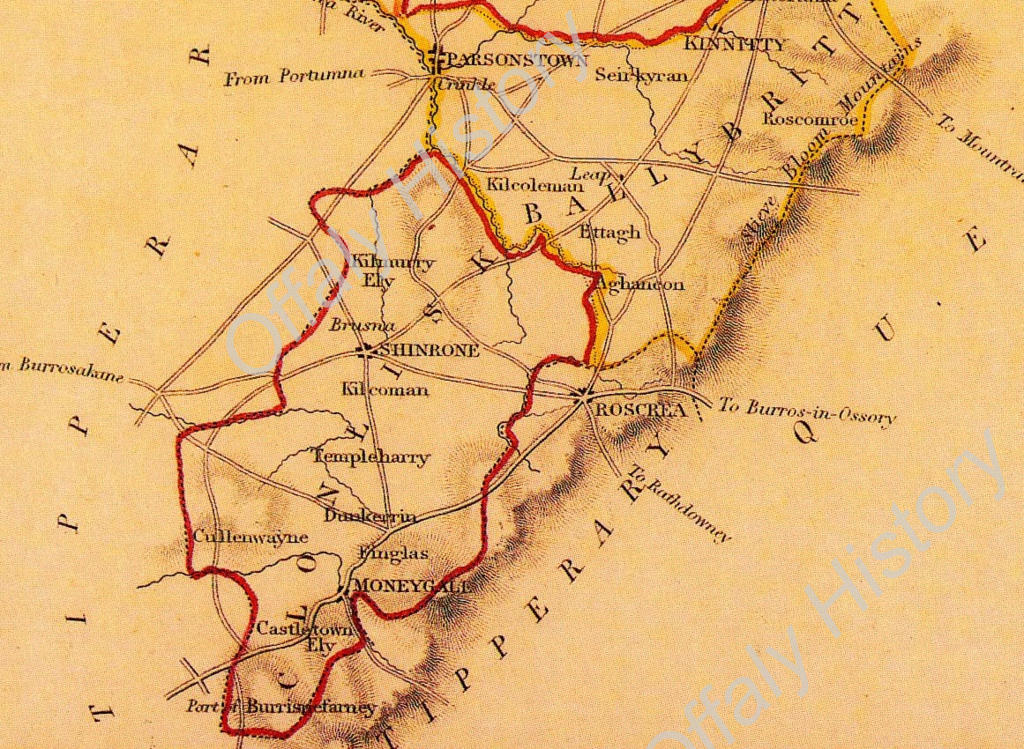 A document in the National Library of Ireland sheds important light on the fate of the inhabitants of a part of county Offaly during the years of the Great Famine. Here the names and circumstances of almost 500 people in the village of Shinrone and its hinterland are included on a register for relief, which was provided during the summer and autumn of 1846. Among the names may well be an ancestor of Barack Obama, 44th President of the United States of America. While Obama’s Irish heritage has been well documented in the past, not least during his visit to Ireland in 2011, few descriptions survive of how the Great Famine directly impacted the Kearney families and their community. It is hoped that this document will be transcribed and made available in Offaly Heritage in the near future.

END_OF_DOCUMENT_TOKEN_TO_BE_REPLACED

Back in 2014 I was an intern in the Heritage Office in Offaly County Council. I compiled a database of all known post 1700 burial grounds in the county. Compiling the database required thorough desk and field based research. During fieldwork I visited 170 of the 187 burial grounds I recorded. While visiting these places I noted many interesting and unusual features, some of which are the basis for this blog post. The list is of course subjective. There are certainly more interesting and unique features waiting to be discovered in Offaly burial grounds. END_OF_DOCUMENT_TOKEN_TO_BE_REPLACED