The Irish Bronze Age dates from approximately 2500BC to 500BC. The period is characterised by the wealth of new, innovative and exciting metalworking techniques. The population of Bronze Age Ireland was highly organised. This period was a time of extraordinary wealth and international exchanges between Ireland, Britain, central Europe and Spain. Among the exceptional Irish hoards discovered in the Late Bronze Age are the great gold hoard from Mooghaun North in County Clare which contained in excess of 146 gold items and the Dowris Hoard in County Offaly with a minimum of 218 bronze objects. The end of the Late Bronze Age came with the arrival of the Iron Age and brought an end to the manufacture of Dowris bronzes.

The Dowris Hoard was discovered on the grounds of Whigsborough House, Fivealley just north of Birr, Co Offaly. Whigsborough House is now called Dowris House, is a listed building, and contains 10 bedrooms, 6 reception rooms and a library.  The Dowris bronzes have been dated to 900 – 600BC, the Late Bronze Age period.  These bronzes are of European significance due to the quality of the metal, the skills of the workmanship and the size of the find. 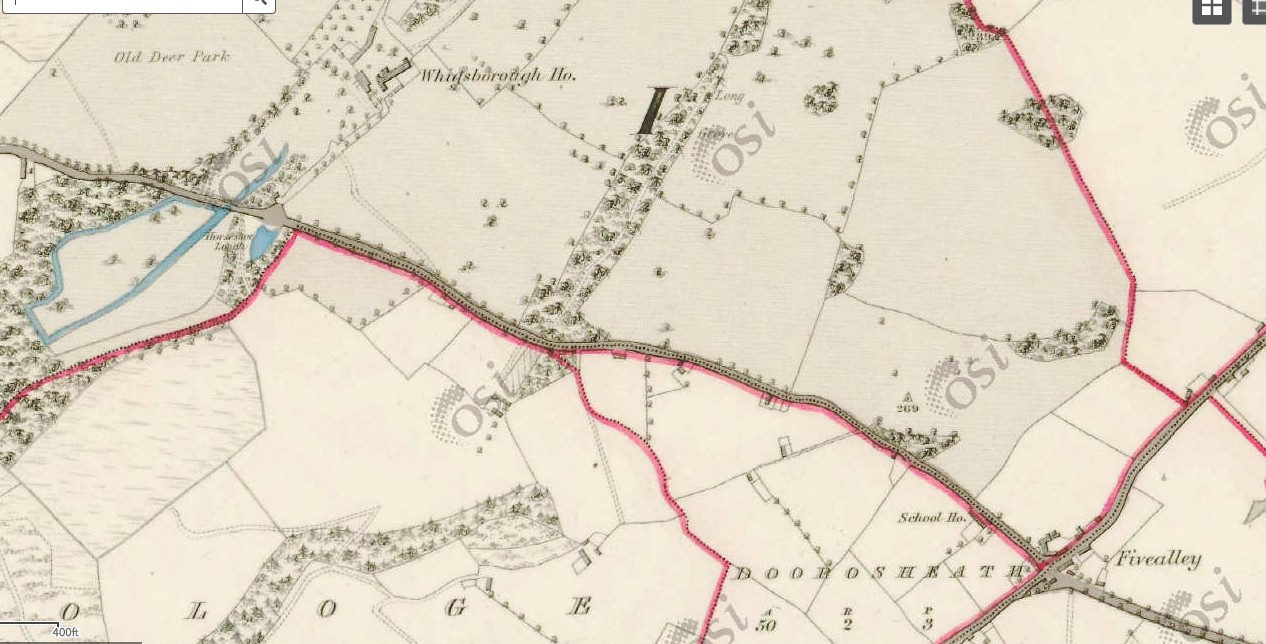 Copper and Bronze in Ireland

Copper, iron, lead and silver were mined in Killarney. A large prehistoric complex using metal working ores from Ross Island on Lough Leane has been identified near the town of Killarney and is 4,500 years old. This is one of the earliest copper mines in north west Europe and was certainly the first place where metal was made in these islands. Later, copper was found on Mount Gabriel, Mizen Head in County Cork where up to 30 small mines were discovered.

Initially, tools were made from copper only and about 2000 BC bronze was discovered by adding tin to the copper. The nearest tin had to be imported from tin mines in Cornwall. 34% of all provenanced bronze axes in Britain contain Irish copper.

Copper from Ross Island and Mount Gabriel has been found in British bronzes, identifying strong trade links between the two countries.  Bronze is created from a composition of 88 to 90% copper and 10 to 12% tin.

The prehistoric mines are small, cave-like openings in the rock. The caves were made by Neolithic miners, where the process for producing copper is called the fire setting process. First of all, a fire is built at the side of a stone wall and the wall is allowed to get very hot. Water is then thrown on the wall suddenly which causes the rock to crack, this allows pieces of the wall to be broken off using mallets of wood or stone hammers. The pieces of stone are then crushed, taken to a fire and heated again. The smelted copper flows out of the heated stone, collected and brought to where it may be poured into a mould to create an object or ingots. There were a number of different methods used to create moulds, some were hollowed out stone, some were two-part moulds from stone while another technique was called a melted wax method.

At Ross Island archaeologists have found thousands of discarded tools, hut foundations, spoil heaps, pits where metal was smelted – even the remains of prehistoric miners’ meals. Ross Island copper contains some arsenic and, thanks to this unique chemical “fingerprint”, the archaeologists have identified Bronze Age objects in Britain that were made from the Kerry metal. 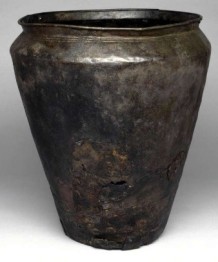 There is no agreement on the date of the find. Unfortunately, and unusually those directly involved failed to take contemporaneous notes. The potential dates for the find may have been between 1825 – 1833. The two antiquarians involved T. L. Cooke and Lord Rosse were gentlemen of some standing who were individually involved in general antiquarian activities and were both members of the Royal Irish Academy.  The time gap between the find and written commentary was such that the date of the find is still contested.

Documentary accounts of the Dowris find were slow to emerge.  Each piece of evidence added a little more to the picture that appeared over the following 100 years.

The earliest written account of the Dowris finds comes in the Dublin Penny Journal dated 18 May 1833. This one-page account describes the ancient metal find which was in the hands of T L Cooke and that were found in a bog near Birr in the Kings County. The main point of the article was to discuss the so-called ‘crotals’ (crotals are bells of various types or rattlers). In addition, General Charles Vallance suggested these bells had been used by the Druids. The article then recounts the use of bells by various saints. The earliest account of a bell is where St Patrick on his journey to Rome gave a bell to St Ciaran of Saigher (Seir Ciarain) to help Ciaran decide where to found his monastery. One of the ‘bells’ found in the bog was given to the Dean of St Patrick’s, Dublin. The article mentioned that trumpets from the same find were in the possession of Lord Oxmantown, the Dean of St Patrick’s and Mr Cooke of Parsonstown. The word Dowris does not appear in the article, there is no mention of the significant other artefacts found, nor is the article signed by the author. 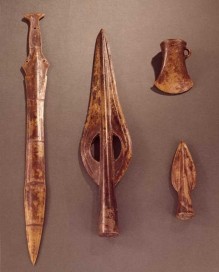 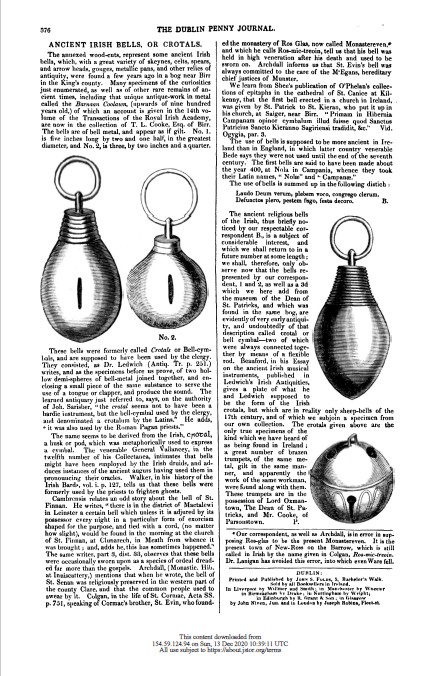 Article in the Dublin Penny Journal, 1833.

The next evidence comes from a nine-page paper in the Proceedings of the Royal Irish Academy read on 30 November 1848 by Rev. Thomas Romney Robinson (1792 – 1882). Thomas Robinson was Director of the Armagh Observatory at the time. The paper is an account of the items in the collection of the Earl of Ross, Birr. There is no detailed information on the locality or dates when these items were discovered. Initial comments relate to the high skills used in the fabrication of the artefacts. The article continues by suggesting that the men who had made the discovery had sold the items on the basis that the purchasers swear never to reveal details of the discovery. In this case the article says that the discovery was in Dooroshead, near Whigsborough on the property a of Mr Drought. It then goes into specific details of the items found (see below). The author then considers why such a large group of bronzes had been buried in one location, perhaps there were buried there as security with the intention of later recovery or perhaps the items were on a cart which fell into the bog and were unable to be recovered. Lastly the author discusses the quality of the workmanship of the spearheads and tools that appear never to have been used.  It does not appear from the article that Mr. Drought received any of the items or was paid for them.

This was followed in January 1850 by a seventeen-page paper in the Proceedings of the Royal Irish Academy, volume 4 where T. L. Cooke replied to the previous submission of Reverend Robinson. Cooke took aim at Robinson ‘in order to correct a few trifling mistakes…, I have thought it right to place on the record before the Academy some facts and circumstances’. Cooke admits that he was the author of the previous letter to the Dublin Penny Journal. He describes the find as accidentally dug up while two men were trenching potatoes in that part of Whigsborough known by the name of Dereens; ‘at least a horse load, many are now in my collection, and I made presents of several of them to other collectors’. Cooke then lists, over 10 pages, details of the bronzes that ‘fell into his hands’. He then works through the previous suggestions of how the items got into the bog without offering a conclusion other than as a ritual deposition. He passes comment on the metal composition of the bronzes and suggests that the healthy vegetation in the area arose from charcoal residue from the smelting of ores to create the bronzes.

Surprisingly, Cooke made no reference to Dowris in his The Early History of the Town of Birr, published in 1875 although he did comment extensively on other areas of south Offaly and northern Tipperary.

Lastly, with access to the Birr Castle archive a 4-page detailed account from Alison, Countess of Rosse was published in the Irish Arts Review, Spring 1985. Lady Rosse discusses Thomas L Cooke who lived in Cumberland Square, Birr and who was in the process of forming a large collection of antiquities: coins, medals, bronze tools and weapons, the nucleus of a small museum. He was a man who would have immediately heard about any local find. She recounts that Cooke sold much of his collection, including the Dowris pieces, to the British Museum in 1859.

The Dean of St Patricks had also acquired some of the pieces from either Cooke or Lord Rosse; these were then given to the Royal Irish Academy upon his death in 1840 and included two trumpets, six ovoid crotals, two smaller spherical crotals, one gouge and four spearheads. Lord Rosse had hung his bronzes in the hall of Birr Castle until, in 1919 a fire broke out in the library of the castle and spread to the hall. Although now fire-blackened the Dowris bronzes were sent for safekeeping to the National Museum which had also taken in the archaeological artefacts housed in the Royal Irish Academy.  Items arrived at the Royal Irish Academy either through loans, purchases or donations. The National Museum of Ireland was founded in 1877 by merging archaeological artefacts in the three institutions Royal Irish Academy (founded 1785), Royal Dublin Show (founded 1731) and Museum of Irish Industry (founded 1847). 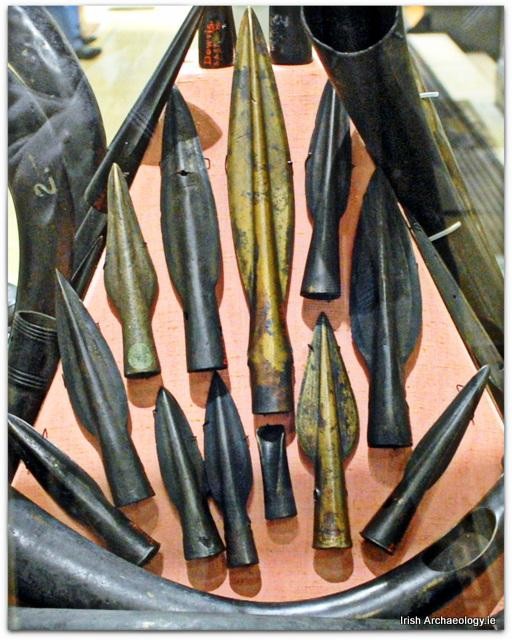 Cooke’s account says that around 1825 two workmen were trenching potatoes in the Deerens on the shore of Lough Coura (which has now dried up) when they made the find. Cooke in his account of January 1850 give the name Ed Hennessy as one on the men and that they were digging in a potato patch which was between Whigsborough House and Lough Coura. John Coles sees this as a possible deposit into water, many other similar deposits in water have been iron, gold, bronze and some silver. Today Lough Coura is a damp marshy area.

What is agreed was that the find containing hundreds of objects – javelins, axes, spear heads, ovoid bronzes, horns and cauldrons was huge – enough to fill a cart.

How many objects were found?  We will never know how many exactly.  Before Cooke sold his quota to the British Museum and Lord Rosse brought his share to the castle a number of items had been passed to friends, others were sold for money and some were exchanged.  We may never know the final number.

Today there are 111 items in the National Museum of Ireland in Dublin and 79 in the British Museum. These include 41 spear heads, 43 axes, 24 trumpets or bronze horns, 44 crotals, 3 buckets and 5 swords. Prof Barry Raftery has a different count; he suggests 218 bronze objects which include 26 trumpets. Prof Peter Harbison suggests that the find exceeded 200 bronze items. John Waddell has produced a yet different list showing 48 crotals, 36 spearheads, 35 socketed axes, 26 horns/trumpets, 7 knives, 5 swords, 5 gouges, 3 buckets, 3 cauldrons, and 3 razors, rings, bracelets and pins (including sunflower and cup headed pins).