I once more visited by friends in Tullamore, Killoughy and Banagher after an unexpected gap of almost six months. Young Covid intervened and I did not get down from my perch in D4 until ten days ago.

It was great to see my old town looking so well and all the works in the square and from High Street to Kilbeggan Bridge almost finished. Walking from the railway station down to the square brought me back to the 1950s and 1960s when I lived in the town and the High Street was a busy spot. The footpaths are wide now but there were few walking and even on Saturday the street was quiet. I see no space to park for my mother (if she were alive God rest her) to pull up in the old Prefect that she had. Sure that is progress. Maybe the plan for High Street got mixed up with O’Connell Street or Grand Parade! Anyway, today I am writing about the east side of High Street, what I will call ‘Upper East Side’, and I will talk about the west side of the street on another visit – if the pause button is not changed to stop!

Spollen’s Pub – the last of the long-established businesses

All the old houses here built from the 1750s to the 1800s have survived on the east side of High Street with the exception of two.  That first, from the top of the street, was pulled down in the 1970s to make a gape for the new carpark where once was Wheatley’s Lane. This is behind Spollen’s pub which, if I am right, is the only business left on this side that was there 100 years ago. Curiously, the newest building on the street – the Ritz Cinema built after the Second War (and on the site of the second house pulled down) – was demolished in the early 1980s by the Post Office department. The PO is now also gone from the square. There is a new car park there now and the entrance to Rose Lawn town houses. So a lot of change since my young days in the 1950s.

Eating and entertainment in High Street

The first building, on the way down  was Ken Roberts’ Motor Works with its pumps and busy garage. I see it is all for sale now. I read somewhere that the house was once a boarding school. Drea’s house was next. I remember Tony Drea well. He was a tall thin man in Williamses when I worked in Hibernian and the firm was one of our big customers. I used to meet him and the late Mick Quirke, who sorted all the insurances from his little office upstairs in  the Head Office in Patrick Street.  The boss of the firm was  ‘Mr Edmund’  and he was our chairman later in the 1980s. Next in High Street was the Lawless Pharmacy building. I often had a meal in it when calling in the 1990s to Tullamore. By then the pharmacy was long gone and it was Tony McCormack’s (a Fianna Fáil councillor – God Bless him. I was sorry for Barry C.’s fall last week. We could do without that in Offaly). Tony had the Nook and Cranny. That time it was no problem to cavort and carouse until 2 a.m. In Dublin now they open the front door to the winds at 11 p.m.  – that is when you can get a meal and if you can pay for it). I hear that the new Shishir place is good. God be with the days when you could dine  in Bolger’s Hotel or Hayes’ Hotel for under 10s.

The next building on High Street east side is now a Direct Provision Centre (maybe they should have continued to call it a hostel as it was in my time. And full of vestal virgins and no men allowed near the place. But sin scéal eile. A busy place when Kenny’s Ballroom was down the street where Dermot Kilroy was and now an Arts Centre.  Not to mention the Central Ballroom). The Doc Moorhead lived in the hostel one time. A great family and very grand my mother said. Next was McGinn’s – a fine old house and then my old friend J. J. Horan, the newsagent. A very nice man and always a great talker. I knew a well-educated man on Arden Road who would pass Houlihan’s and Robbins  shops to get his paper from J.J. he so much enjoyed the chat and the news

I see a very nice Midland Books store beside Horan’s and I called in and met a tall girl from New Zealand who was fully versed on the latest books. Great display of local history books but I saw nothing on the O’Molloys – a gap that needs filling. I remember a solicitor and a butcher were next. Then a house that was closed up where the carpark is now.

This was followed by the great Tom Lawless’s pub and grocery. A most decent person, a great pint and lots of stories from neighbours of ours, out from Mount Bolus and Killoughy. Tom was an undertaker and his son does it now. The pub is Spollen’s now and they were great men for Tullamore giving huge employment – Johnny and Thady I recall.

Dermot Kilroy and the coming of television

I did not know Allen’s shop. It was a ladies wear and of course in the ‘fifties strictly forbidden to men. The bustle of High Street got going at this point with hundreds of lads going to school to the Brothers – St. Columba’s.  It was about £12 a year in my time and our class was no more than 15 or so. I can remember Bro. Geraghty and a big man called ‘Sham Burke’ and another brother by the name of Fahey. Of course that was down on the canal bank then, until the new school was opened in about 1960 in High Street. There was a lot of change at that time as Dermot Kilroy got the old Charleville Estate Office and made it into a showroom for televisions. My friend and neighbour Fergal MacCabe, who is from Tullamore, calls it the Crawford Building. To be honest I did not know what he was talking about until he said Kilroy’s Television Showrooms. Was not the great Jackie Charlton there a few years ago?  I can remember when it opened there was a band up high on the roof.

Kilroy’s private house is looking great again and I read the story about it in one of the blogs here a few years ago. Great to see such energy on the part of a young couple. It must be the last private house still lived in on this side of High Street. Beside this house is an optician but I always knew it as A.L. Morris until it became the Credit Union Office. He was a Protestant grocer and I can still remember bags of flour outside the door. Only two groceries on this side of the street in my time.

Hollywood dreams on the High Street

After that was the great Ritz Cinema which was a wonderful place of entertainment for about thirty years and I believe could seat 1200. Many was the happy hour there for Tullamore people. I remember the films Exodus, Ben Hur and Lawrence of Arabia among other Hollywood Greats. The old British cinema was good too with the Ealing and Carry-on comedies. Some of the local priests used to complain and old Mr Mahon would colour in anything too risqué on the posters. Beside the cinema was a sweet shop and later the Book Mark.

A clean shirt and polished shoes with soles and heels

The last block on this side was comprised of Colton’s Hotel and Willie Dunne’s shoe shop and repair followed by Mr Ginnelly’s that opened on to the square. I had my first Chinese dinner out of Dublin in what was Colton’s in the late 1970s before going to the Bridge House dancing on Thursday night. Willie Dunne was a perfect gentleman as was  Mr Ginnelly. 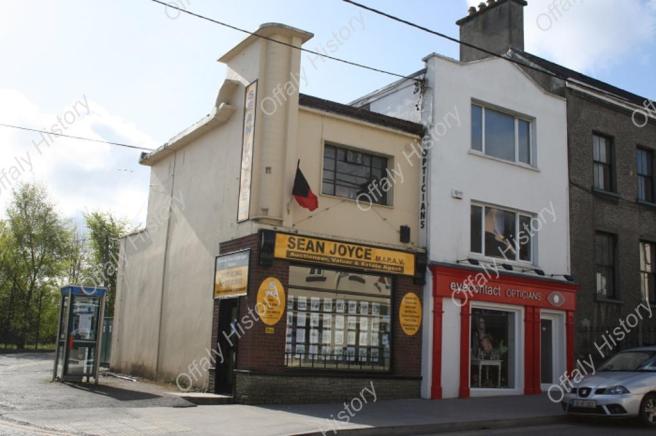