A new book comprising a selection of fifty of the poems and ballads of Edward Egan of the Meelaghans, Tullamore has just been published by Offaly History. The book was edited by Michael Byrne, Anne O’Rourke and Tim O’Rourke and is a fitting tribute to a man who died 80 years ago and in his time was revered throughout the midlands for his timely poetic commentaries on the social and political scene in his native county and his appreciation of all that was beautiful within a day’s walk of his home place.

The poems in this new book are reproduced, in part, from the first edition of Egan’s only book, King’s County Couplets which was printed in Birr in 1892 and is now a very rare item. The remainder of the poems in this new collection were mostly located in the old newspapers by staff members at Offaly History and carefully edited by Anne O’Rourke and Tim O’Rourke. Most of the poems are accompanied by photographs selected and annotated by Michael Byrne and connected with the text. Many of them are rare views and some, such as family portraits and the old Geashill railway station, are now published for the first time.

Many of Egan’s poems were published in the 1890s and as they often describe local events of that time they offer a window for us into the modest doings in the years after the fall of Parnell. It was a time when the local newspaper provided the only access to the world and people lived mostly by candlelight and told stories to while away the long winter evenings. The subject matters includes visits to Geashill, Killeigh, Ballinagar, Birr, Durrow, Ballycowan, Hophill and Charleville, the fair in Tullamore, the first piped water scheme of 1895, Ballykilmurry Races, local politics and his own ‘nine-hole-stone’ in the Meelaghans. Egan wrote in the introduction to his 1892 collection:

If I can make an hour less dreary,
Or soothe the sick, or cheer the weary;
Or make some old curmudgeon laugh,
When poring o’er my rhyming chaff—
If I do this, I’ll count it gain,
Nor ever think I’ve writ in vain.
Edward Egan: the last of a line of Egans now famous in Mormon history

Edward Egan was born in 1858 and was a member of a family who had lived on their modest landholding of twenty-five acres since the 1760s. The Egan family of the Meelaghans, Tullamore has excited much interest from family history enthusiasts, especially in the United States, arising from the fact that Major Howard Egan, born in the Meelaghans in 1815, was among the American West’s outstanding frontiersmen and developers. He is best known as one of the original Mormon pioneers and a celebrated employee of the Pony Express, as were his two sons, Howard (born 1842, died 1918) and Richard (born 1840, died 1916), who also served as riders. When the old Egan homestead and farm were offered for sale by the Reps of Thomas Dunne in 2017 friends of the Howard Egan Heritage in the United States sought to buy it for a museum cottage but did not reckon on Irish land prices in what was a very successful auction.

Edward (the Poet) Egan’s father, William Egan, was born in 1815 and was the son of Edward Egan and Margaret Coffey who were married in Geashill parish in 1811. The Poet’s great great grandfather was Bernard who was born about 1760 and who is said to have had two sons, Howard and William. Pioneering the West published in the United States in 1917 (following on from a visit to Tullamore) celebrates the Egan contribution to the heritage of the United States. William Egan, one of the children of the 1811 marriage, was born in 1815 married Maria (otherwise Bridget) Murphy, a daughter of Patrick Murphy, in 1857 in the parish of Killoughy in the Church of Ireland church. William died seven years later, aged 50, in 1865. What is made clear in Pioneering the West was that Edward (the Poet), the only child of William and Maria, was born in 1858 and was the last of the line of those who remained in Ireland. Mrs Maria Egan, born in 1833, was a widow for fifty years and died in 1915. This makes the photograph taken of mother and son outside of their Meelaghans cottage by the American relations especially interesting. The Poet Egan had the benefits and drawbacks of being an only child, who apart from being for a brief interval married, lived much of his life with his mother, but was alone for the last twenty-five years. Egan began his literary career as early as 1879, but only in earnest after he had returned from Australia, where he was a very discontented emigrant for a short period. “Australia,” he declared, “is; or at least was, in my time a land of white slavery, and no man ever turned his back on it with greater pleasure than I did”. When Egan was interviewed for the local press in 1935 he was still living in his modest cottage where his mother had died twenty years earlier. The Meelaghans was then described as ‘a cluster of comfortable farmhouses all round, forming a typical Kickham village, where the people there, Mr. Egan says, are as Celtic and as kindly as any of those to be found in Knocknagow. “I have the best neighbours in Ireland” he declared with emphasis.

Edward Egan died on 24 February 1940 at the age of 81. He was the last of his line and was buried in the family plot at Killeigh church cemetery in an unmarked grave. His obituary was published in the Tribune of 2 March 1940.
A notable Offaly man has passed away by death of Mr Edward Egan, of Meelaghans, Tullamore. A man of cultured mind and great literary ability, for long years his was a familiar name as the author of short stories that were truly racy of the soil. He contributed to many of the leading magazines notably to Irelands Own. Some thirty years ago he published a collection of ballads in a small volume, entitled King’s Co. Couplets, He spent some time, as a young man in New Zealand [Australia] where he was engaged in sheep raising. For more than forty years he lived alone on a little farm at the Meelaghans, enjoying life in his own quite, kindly way. During his last days he was cheered with visits of many old Tullamore friends who appreciated him, and whose esteem for him grew with the passing of the years.

Egan’s poems had a particular resonance in 1930s Ireland when the ways and customs were recalled with affection by one commentator:

‘We hear the laughter of the now-forgotten cross road’s dance. He takes his readers to a turf-cutting party, or lets them hear the hum of the threshing machine, or see the grief of Irish emigrants as they wave a fond farewell to those they leave behind. It seems a great pity that some enterprising publisher would not get the opportunity of publishing in book form a collection of Edward Egan’s short stories. They would not be excelled by the “Hidden Ireland” of Daniel Corkery or the “Gentle Ireland” of Aodh de Blacam. To the people of another generation Edward Egan’s stories were a gripping feature in several Irish publications.’

And so eighty years on from Egan’s death, and almost 130 years since his own booklet was published, this collection of Egan’s poems is now launched (online and not on the hearth of some old cottage or at Offaly History Centre). Many who must stay at home during Covid will have the pleasure of reading this new book which can be ordered online for just €15 (plus postage) from Offaly History and is also available from members of the committee including Helen Bracken, Frank Brennan, Charlie Finlay and Michael Byrne.

Who knows we may again have the pleasure of tea and cake at an Offaly History Centre, Bury Quay launch and a glass of Tullamore DEW (also founded in the 1890s) next door to celebrate the work of Edward (the Poet) Egan. Offaly History thanks the editors of this handsome new book, the staff of Offaly History, the county heritage officer Amanda Pedlow, Offaly County Council and Creative Ireland. 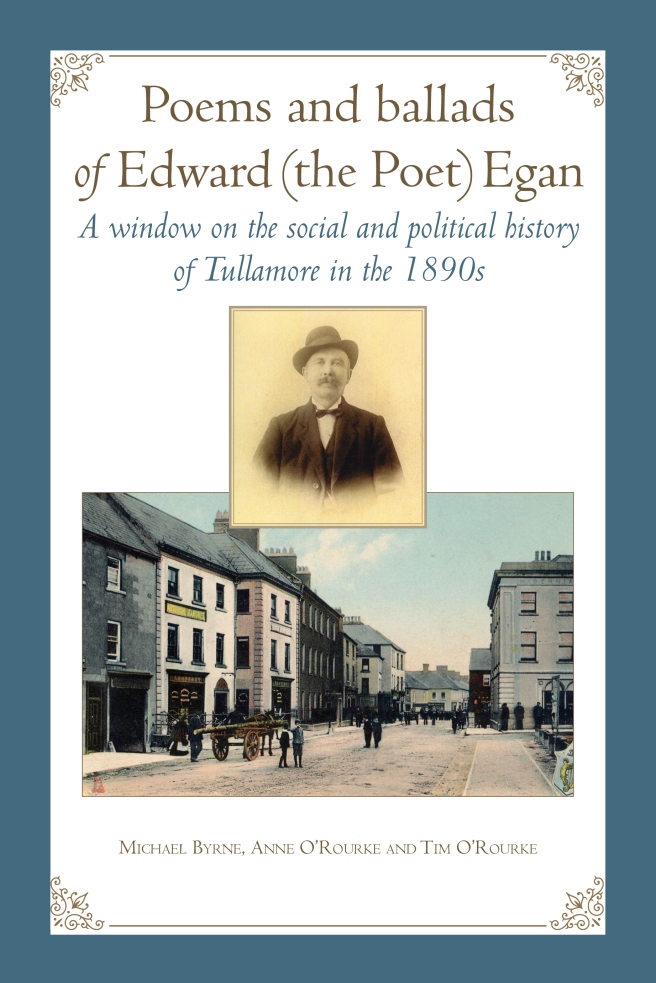 Where can I buy this book?
The Poems and Ballads of Edward (The Poet) Egan retails at €15 (soft cover, 128 pp, full colour, fully illustrated) and can be purchased as follows:
1. Spar, Church Road, Tullamore
2. Byrne’s Store, Geashill
3. Midland Books, High Street online for now only
4. Offaly History online shop only for now at http://www.offalyhistory.com. Offaly History Centre is currently closed.
5. From Michael Byrne, Tullamore by ringing 085 7727708 and or text. Free collection and deliveries in Tullamore area with post code please and payment online to our bookshop on http://www.offalyhistory.com preferred, or card.