As a Ferbane student wrote in the School Folklore Collection: “There’s a large amount of bogland in the locality round here.” County Offaly is a place covered in peatlands–more than a third of the county was classified as peat soil by in the National Soil Survey of Ireland published by Teagasc in 2003. Offaly is also the county with the highest proportion of homes using those bogs for turf. At 37.9% of households heated with turf according to 2016 Central Statistics Office data, Offaly outcompetes the next county highest county, Roscommon, where 26.6% of households have the turf fire burning. The prevalence of bogs and bog-connected people is what brought me to live in Tullamore for a year.

I am a soil geographer, a visiting researcher from the United States, here as a 2018-2019 Fulbright-National Geographic Digital Storytelling Fellow. Since last September, I have interviewed hundreds of people all around Ireland and visited dozens of bogs, all with the aim to understand the relationship between carbon-rich peat soil and Irish culture. Part of understanding the culture of bogs has been asking people about their memories of the bogs over the years, and it has been fascinating to listen to their stories.

For many people, if I ask them about their connection to bogs, it strikes them as a strange question. “I don’t really have a connection, we just use turf” is a common response. But, what could be a deeper connection to a bog than using it daily to heat your home? Or, sometimes people feel I am simply looking for turfcutting stories, but I am actually curious about all types of connection. Some people go to the bog to walk, some make a career of studying bogs, others think of it as a place of hard labor to be avoided. All of these are interesting ways that bogs are part of the culture of County Offaly and Ireland more broadly.

Recently, I stopped by the Clara Day Centre to ask the older generation to share their strongest memories of the bog. Co. Wicklow native Mary Grace told me how tea was served on the bog during turf harvest, something many people have mentioned to me this past year. For Mary, tea was carried to the bog in a tin billycan. This was a new word for me, so I had to ask her to describe it. Luckily, another gentleman in the Day Centre, Co. Roscommon native Gerry Carroll helped out by drawing a sketch of a billycan, which he had also used to transport tea to the bog. It looks like a bucket with lid that has a hole where you can pour the tea into a cup. Merriam-Webster Dictionary defines a billycan as: a metal or enamelware pail or pot with a lid and wire bail (arched handle).

“The tea was hot in the billy can, but not very hot,” Mary said. “We brought milk to the bog in a glass bottle and used tea cups or enamel mugs.” If the tea were quite hot, Mary remembered that the enamel mugs could burn your lips. Others have described building a fire out at the bog and making tea there with a kettle. The trick, I’m told, is to keep the smoke out of the water. Some people have suggested the best way to do that was to slide a reed into the spout of the kettle. 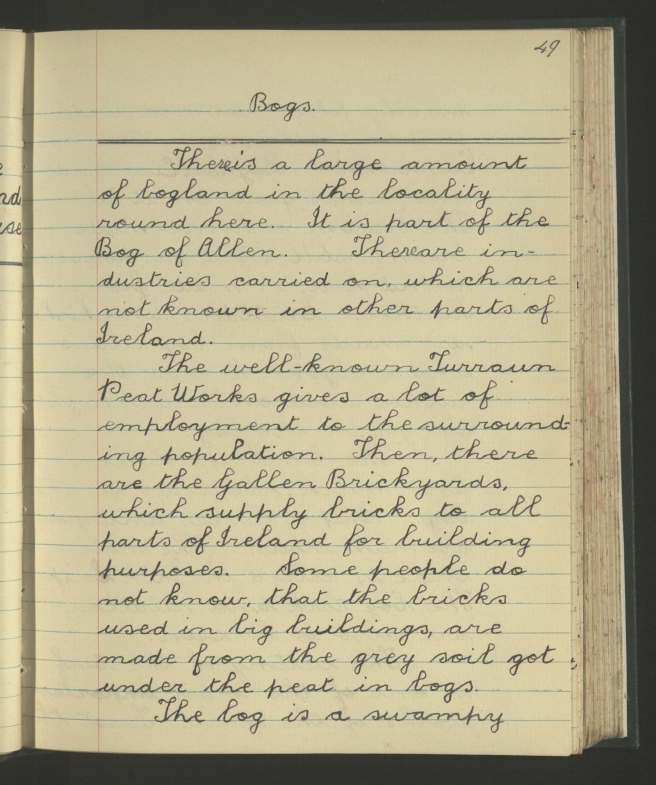