Spring is in the air and I decided to tip down to Offaly during the week of St Valentine’s and see my old friends in Killoughy and Banagher. There are a still a fair number of Molloys in that part of the world. Everywhere I go now I hear about Tullamore because of the new distillery and I think back to the time when some of my ancestors had distilleries in Tullamore, Kilcormac and Banagher. As to Molonys I was told once by a Tipperary man that there are at least 22 variants of the name so good luck with the searching for this family.

Clonony Castle
I was down before Christmas and got to visit Clonony Castle where the charming woman Rebecca Armstrong resides and is the hostess for seasonal and summer events there and has the old castle open to the public. I believe she restored it herself and is there about sixteen or seventeen years. She has done a great public service and I suppose got no grants of any kind. Had the OPW done the job you can be sure it would have cost millions and be closed half of the year.
De Renzi and Clonony
Anyway enough grousing. We Molloys are nothing if not resilient. I asked some of the big wigs in the Offaly Historical Society to find out more about a barrister by the name of Edmund Molony because I came across an inscription that he put up for his wife in a London church which seems to have been as ample as was her love for the same Edmund. It struck a chord because of my pre-Christmas visit to that lovely old castle which is near the Grand Canal and the town of Ferbane.

The castle was built by MacCoghlan’s one of whom had a nice tombstone in the old church in Banagher. They were great castle builders in that part of Offaly and the nearest thing we had to gentry before the English came to take all they could. Though in fact it was a German by the name of Matthew de Renzi (1577-1634) who got the land. De Renzi was born in Germany, later went to London where his business failed and fled to Ireland. Here he travelled widely and by 1613 had land in the heart of MacCoghlan’s country in West Offaly or Garrycastle barony. He used legal trickery to get lands in west Offaly and kept a greedy eye on Sir John MacCoghlan with a view to securing more lands. He lived for a while in Clonony but by 1620 had moved to Wood Quay, Dublin. He retained his lands in West Offaly and later acquired lands near Tinnycross, Tullamore where he was established by 1635. Some of his family may have built Hollow House, Tinnycross by 1700. He had a great knowledge of Irish which he used to further his commercial interests. He died in 1634 and his death is marked in a monument in Athlone in the Protestant church – St Mary’s I think. His son, married a daughter of Sir John Moore of Croghan and Tullamore. That time marriage was a sort of a pension sum. Not so our hot lover Jane Molony of Clonony who was married no less than three times. Clearly a woman con experienca as my friends in Alicante say.

Edmund Molony, barrister-at-law restores Clonony Castle
Her third husband was the barrister Edmund Molony who was the first to restore Clonony which presumably had not been lived in since the time of De Renzy in the 1600s. Of the members of the barristers’ circuit in the earlier part of the nineteenth century perhaps none was more colourful than Molony.
A description of Clonony in 1838 states that Molony was a counsellor (i.e. a barrister the same as my namesake Constantine Molloy who died in 1897) who ‘was bred to the law and retained a very proper veneration for it’. Molony is said to have kept two flagstaffs on the battlements of Clonony which he used for the purpose of commemorating his professional triumphs.
Molony, it appears, was formerly of Woodlands, County Dublin and may be one and the same as the Edmond Molony born in County Galway in 1766 and called to the bar in 1795. His second wife (a daughter of Anthony Shee of Castlebar) died in January 1839 and was interred in St. George’s Chapel in London. The epitaph on her monument erected by her husband is extremely long, having more than 300 words and emphasises the connection with the great legal family of the Malones of Baronstown, County Westmeath by virtue of Edmund Molony’s first marriage. In those days people boasted of their family links. I suppose they still do and I am as bad as any – my son the engineer is drowning types.

Anyway, no expense was spared with the inscription and Jane Molony was described as hot, passionate and tender and a good artist in water colours. She died in 1839. It seems that her third husband, Edmund Molony, had married a Malone from Westmeath by a previous marriage. The memorial refers to their lands in King’s County/Offaly which were located near Pallas Lake outside Tullamore. 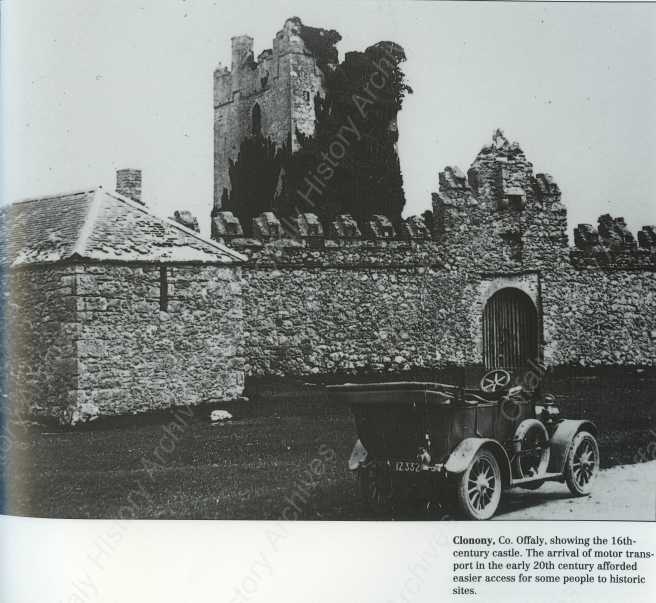 Old barrister Molony may have been a bit mad before he died in March 1843. He made two wills in 1842. The first in July 1842 was in favour of an apothecary by the name of Seymour from Banagher and Eyrecourt whose wife was a Miss Faulkner and a connection of Molony’s late wife. The second will was made in October 1842 and was in favour of Molony’s agent Patrick Tierney, a Mrs Cecilia Kelly and a relation of Molony’s, Henry Malone. The witnesses including a Thomas McIntyre of Ballyshean got a good grilling from Macdonough who went on achieve great fame as a barrister. Tieney had sold the fittings in the castle for £180 on the strength of the second will. The Tullamore jury found in favour of Seymour and the first will.
It seems to me but I cannot be certain that much of the old Clonony estate of Molony was owned by Thompsons by the 1850s though a certain Maria Robbins was in possession of Ballyshean nearby. Molony’s lands in, Westmeath and Mayo were sold in the Incumbered Estates Court. 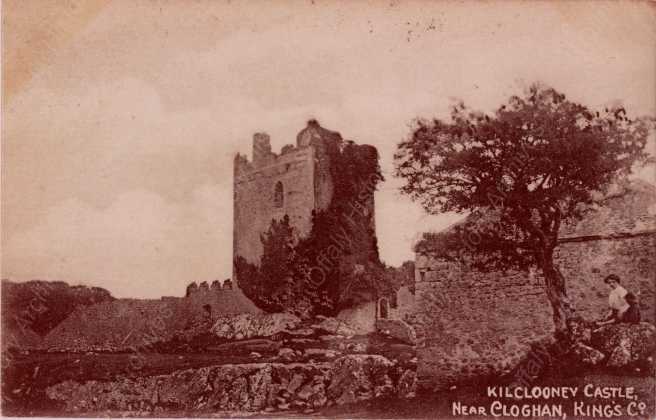 A visitor to Clonony in 1928 recorded that:

In Clononey we stopped next to a gorgeous castle, ivy covered; one of several fortresses built by the Norman barons and the Anglo Irish who commanded their domains with the sovereigns’ authority. And one-toothed aged man approaches us. His only, enormous tooth, rounded like a megalithic monument, seems to have soaked up the strength of all the fallen ones… “I am the oldest inhabitant of this village”, he says “I can still remember the auction” … For this old man, the auction of Clononey’s castle furniture is one of the memorable days in History.
Was he thinking back to the 1840s or later?

I promise to write more but I have been warned off saying anything about the Boleyn tombstone found near the castle in 1803, or so it is said because it should appear on Offalyhistoryblog soon. I do hope to get back to writing about the old houses on Charleville Road, Tullamore and some of the new ones when I am let.

Inscription to the hot, passionate and tender Jane Molony of three husbands
SACRED TO THE MEMORY/ OF MRS. JANE MOLONY/WHO LIES INTERRED/ IN A VAULT UNDERNEATH THIS CHAPEL/ DAUGHTER OF ANTONY SHEE/OF CASTLEBAR IN THE COUNTY OF MAYO ESQRE/WHO WAS MARRIED TO MISS BURKE/OF CURRY IN THE SAID COUNTY/AND COUSIN TO/ THE RT HONBLE EDMOND BURKE/COMMONLY CALLED THE SUBLIME/WHOSE BUST IS HERE SURMOUNTED OR SUBJOINED/THE SAID JANE WAS COUSIN TO/ THE LATE COUNTESS OF BUCKINGHAMSHIRE/AND WAS MARRIED TO/ THREE SUCCESSIVE HUSBANDS/FIRST STUART ESQRE/COUSIN TO THE LATE MARQUIS OF BUTE;/SECONDLY TO WILLIAM COLLINS JACKSON/OF LANGLEY LODGE IN THE/COUNTY OF BUCKS FORMERLY MILITARY SECRETARY/TO THE HON: EAST INDIA COMPANY IN INDIA ESQRE/THIRDLY EDMOND MOLONY OF CLONONY CASTLE/KING’S COUNTY IRELAND ESQRE/BARRISTER AT LAW AND LATE,/OF WOODLANDS IN THE COUNTY OF DUBLIN/COUSIN TO THE EARL OF ROSCOMMON,/WHO IS BROTHER IN LAW OF THE /PRESENT EARL OF SHREWSBURY/AND ALSO COUSIN OF LORD VISCOUNT DILLION/OF COSTOLLO AND GALLON IN THE KINGDOM OF IRELAND/THE FIRST WIFE OF THE SAID/ EDMOND MOLONY WAS JANE MALONE/WHO IS INTERRED IN THE DEMESNE OF BARINSTOWN/IN THE COUNTY OF WESTMEATH WITH HER BROTHER IN LAW ANTONY MALONE ESQRE,/AND ALSO WITH HER COUSINS/LORD SUNDERLIN AND HIS PREDECEASED BROTHER/EDMOND MALONE COMMONLY CALLED/SHAKSPEAR MALONE LATE OF/QUEEN ANNE STREET EAST LONDON/SHE WAS DAUGHTER OF/ SERGEANT RICHARD MALONE/
AN EMINENT LAWYER AND/A GREAT STATESMAN WHO POSSESSED/GREAT ESTATES IN THE SAID KING’S COUNTY/AND NIECE TO THE RT. HONBLE ANTONY MALONE/DECEASED WHO WAS GREATLY REGRETTED/OF WHOM IT WAS SAID BY ONE OF/THE MOST ELEGANT WRITERS OF THE DAY/THAT HE POSSESSED ONE OF THE SWEETEST TONGUES/THAT EVER UTTERED THE DICTATES OF REASON/HE WAS A GREAT PATRIOT AND/REFUSED THE GREAT SEALS OF IRELAND/THE SITUATION BEING AT THE PLEASURE OF THE CROWN/WHILE CHANCELLOR OF THE EXCHEQUER/OF IRELAND FROM WHICH HE WAS REMOVED/WITHOUT CAUSE OR HIS OWN CONSENT/HE AVAILED HIMSELF OF THE/JUDICIAL PLACE ATTACHED TO IT/AND SAT ON THE BENCH ABOVE/THE CHIEF BARON AND DECIDED MANY CASES/WHICH GAVE GENERAL SATISFACTION/AND HIS DECREES WERE NEVER QUESTIONED/HE DIED 1776 AGED 76 THE SAID MRS MOLONY/OTHERWISE MALONE/DIED AT SAID WOODLANDS/IN FEBRUARY 1808 AGED 59/
THE SAID MRS MOLONY//OTHERWISE SHEE DIED IN LONDON IN/ JANUARY 1839/AGED 74/SHE WAS HOT PASSIONATE AND TENDER/AND A HIGHLY ACCOMPLISHED LADY/AND A SUPERB DRAWER IN WATER COLOURS/WHICH WAS MUCH ADMIRED IN THE/EXHIBITION ROOM IN SOMERSET HOUSE/SOME YEARS PAST/‘’THOUGH LOST FOR EVER, YET A FRIEND IS DEAR/THE HEART YET PAYS A TRIBUTARY TEAR.’’/THIS MONUMENT WAS ERECTED/BY HER DEEPLY AFFLICTED HUSBAND/THE SAID EDMOND MOLONY/IN MEMORY OF HER GREAT VIRTUES/AND TALENTS/BELOVED AND DEEPLY REGRETTED/BY ALL WHO KNEW HER/FOR OF SUCH IS THE KINGDOM OF HEAVEN./