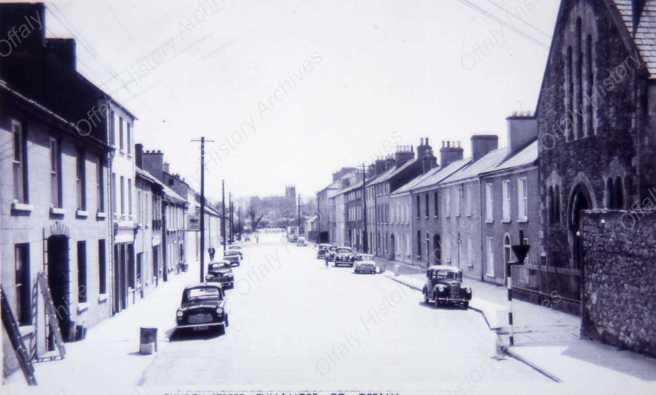 I left Tullamore years ago but I enjoy reading the Offaly History blogs. A friend of mine died there recently and it brought back many memories of my time in a flat in Church St, Tullamore. I was there in the late 1960s and 70s and it had certainly changed when I saw it lately. I came to work in the hospital from a small farm near the Mayo Sligo border and found the midlands a bit strange at first. I came to love Tullamore. I lived in hospital accommodation at first but eventually a friend and I branched out into a flat. There were lots of flats in Church St in those days. Nobody called them apartments! We were down near Merrigan’s furniture store in the terrace below the Methodist church. There were two of us. We had one bedroom and a living room. Our kitchen was actually little more than the passage between the two rooms with a two ring cooker and oven, a sink and a little press. Ikea eat your heart out! We shared a bathroom and toilet with the girls across the corridor and it was fine .We took turns to clean it and we never fought! We also took turns to answer the phone in the hall and answer the front door. We all certainly knew each other’s business! There were lots of people living in similar flats right along Church St and we knew each other well to see. You could set you watch by one lad who used to drive his car around from Church St to Harbour St every morning to collect his paper from Francie Gorry ! I think he was one of the teachers from near the Manor.

The old shops such as McCabe’s, Morris’s and Champs’ shops
I remember Colm McCabes’s shop. It was great for hardware and a very nice man he was. Morris’s shop was there too. You could get all sorts of drapery there and I loved to see the money flying across the shop in little boxes on pulleys. I remember Mrs Morris at the cash section in the middle of the shop. Her brother was near the front door and at the back of the shop was the women’s underwear section where business was conducted in hushed tones. 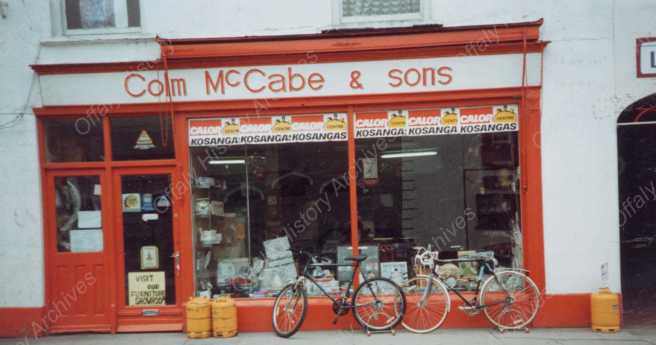 Paddy Carroll had a lovely shop where Roma grill is now. He had lots of Waterford glass and I got a few wedding presents from there when I left to get married. He also sold gas and was always pleasant when we went in. There were flats above his shop. I think the girls there worked in the banks and some in the Bridge House. There were teachers there too as far as I remember. Someone told me there was a terrible fire there but I was gone by then. No one was injured as far as anyone knew. I often wonder how we were not all burned to death in those days. We all had Superser gas heaters and we were always drying clothes near them. There was always a particular smell of gas and damp in most of the flats.

Champ’s shop was at the corner where Supermacs is now. Billy Champ could say anything to you depending on his mood! His mother was a more patient woman. Mrs Dalton sold second hand clothes near there. I was never in it as it always looked so dark and there were always older women chatting in there. I think it was the only one of its kind in the town at that time. The Small Profit Stores was a nice shoe shop along there also. It was owned by Sidney Champ, a brother of Billy and a quieter less fraught individual. The Manor Lounge was a very popular bar. There were a few lads in flats at the back of it. Bolger Carroll worked there before he went to England and himself and Liam McGuinness were always good fun. I was delighted to see Liam is still in business today with his taxi service. It was such a rarity in my time in Tullamore. 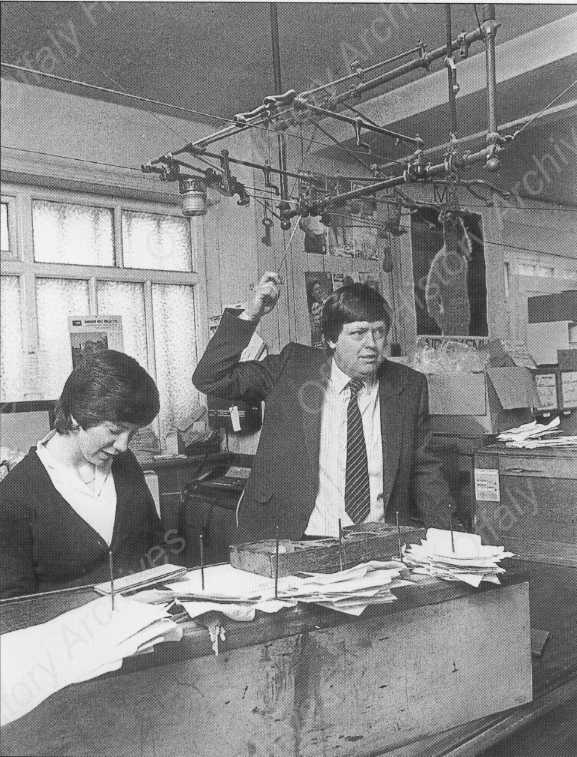 The Bridge House restaurant and its swing doors
It was nice to go back to the Bridge House too but a lot has changed. When we got paid and especially if we got a bonus we would treat ourselves to a Bridge House Special on that Friday. When you went in the front door you would turn left and go through what looked like saloon swing doors. Once you went through there you knew it was a special occasion. The tables looked lovely and the lights were low. All the staff were very friendly and we knew quite a few of them. The Special was a chicken and mushroom vol au vent with vegetables and chips or mash, or often a potato in silver wrap paper. It had certainly not been seen in Tullamore before! I still get a warm feeling thinking about it. I have been in so many restaurants around the world since but I still keep that memory of the Bridge House as a very special one.

Bolger’s Hotel , Brian Wilson’s Oasis and Rattigan’s Copper Urn
Another good food memory was our tea in Bolger’s Hotel at the bottom of Patrick St., near the garda station. You always had a great fry up and we got to know lots of the young guards who used to eat there too. On Saturday nights we used to go to Mrs Flannery’s Folk Group there where we heard the best of traditional music from local, national and international artists. On a fine day we would treat ourselves to a Knickerbocker Glory with Brian Wilson in the Oasis cafe, also in Patrick St. It was an enormous dish of ice cream, fruit, cream and a raspberry sauce. It probably wouldn’t be classed as suitable for vegans nowadays but in those days even cholesterol hadn’t been invented and we enjoyed it all to the full! There was a nice bar beside the cafe called the Copper Urn and one belonging to Williams with nice murals on the wall. We didn’t go in as they were mostly men’s pubs in those days. 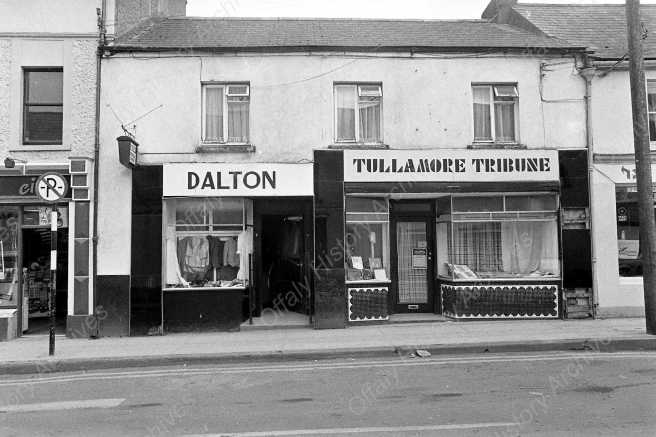 Carter’s, Joe Bracken and Carrragher’s
Jimmy Carter had a great chip shop off Church St on the way into Market Sq. He was such a nice man and his sausages and chips were second to none. They were a regular feature of the diet on a Thursday evening. If it were Friday we got the fish. We cooked ourselves too! We got our fish, vegetables, fruit and pork from Joe Bracken’s shop in the Shambles. It was almost a club as you met so many people there on a regular basis and Joe kept everyone in chat. I still use a recipe for red cabbage that I got from Mrs Carragher when we were both shopping–probably about 1976, and it is a family favourite at Christmas. I have a plum cake recipe from Mrs Morris who was always ready with good advice and cooking tips. 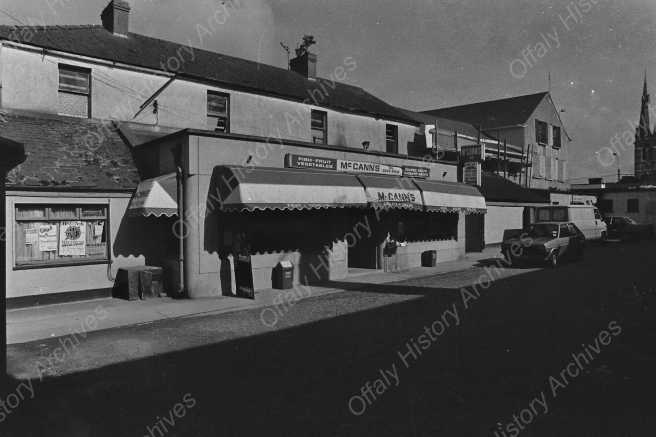 Lots of memories flooding back now – fork suppers in the Harriers, Central ballroom dances on a Sunday night, carnivals in Kearney’s field and pictures in the Ritz cinema in High St. Maybe for another day!