In the decades before the Great Famine of the late-1840s numerous parliamentary inquiries were held into the condition of the poorer classes in Ireland. Political and social elites wished to understand the nature of Ireland’s seemingly endemic poverty in the hope of improving the social, economic and moral condition of the peasantry, as well as quelling the country’s tendency for social upheaval and political radicalism. The most significant of these inquiries was the Royal Commission for Inquiring into the Condition of the Poorer Classes in Ireland (aka the Poor Inquiry). Chaired by the Church of Ireland archbishop of Dublin Richard Whately (1787-1863), the commission sat between 1833 and 1836, holding extensive public inquiries (akin to court sittings) in parishes throughout the country, supplemented by extensive correspondence with persons of significance across the island, as to the social condition of the poor in their locality. The printed output of the commission – totalling more than 5,000 pages of detailed information, witness testimonies and statistics – constitutes an unparalleled source for the study of poverty in the pre-Famine period. The Poor Inquiry reports tell us much about County Offaly (King’s County) a decade before the Great Famine.

The most common way for the poor to be assisted through their distress – either temporary or long-term – was to fall back on the support of family, friends and neighbours. It is clear that this was the most readily available and most reliable source of relief for the destitute. Family and friends could provide cash, food, shelter, fuel or blankets to those they knew. Organised charitable work by a voluntary association was not as common in King’s County as it was in more urban parts of the country; even locations in the impoverished, rural western seaboard had more experience of organised relief efforts at times of famine and epidemic. As Timothy P. O’Neill has observed, ‘there was no tradition of attracting funds for the poor in [King’s] County’. However, this was a means of poor relief that typically went unrecorded. Whereas a family’s admission to a workhouse or their receipt of parish relief was recorded in the appropriate register (many of which survive to this day), the receipt of some trivial alms from an acquaintance did not lend itself to the creation of any documentation. Therefore, for historians examining what was clearly the most common form of poor assistance, the sources are frustratingly scarce, because they never existed! Among those who corresponded with the 1830s Poor Inquiry was medical doctor and Justice of the Peace William Wallace, who made observations regarding the state of the poor in Tullamore town and its environs, which then had a population of just less than 10,000. Dr Wallace claimed that he knew of ten widows who were ‘supported by their friends and by begging’, while there were approximately 100 elderly and infirm persons ‘who are supported by their friends, relations and private charity’.

In the parish of Monasteroris (incorporating the town of Edenderry, with a population of just above 4,400), Church of Ireland clergyman Rev. Graham Philip Crozier remarked that forty elderly paupers were ‘supported by their friends, others by almsgiving. There are many [more] in the country.’ Instances such as these reveal that the Poor Inquiry material is an entry route for researchers eager to understand informal, private methods of poor relief in this period. These acts of charity were performed on a one-to-one level, within communities, and beyond the scope of corporate charity, such as workhouses, parish relief funds and charitable societies.

Begging was among the most common survival strategies for the class of agricultural labourers, who typically lived on a sublet piece of land of one or two acres and who were wholly dependent on the potato for food: Catholic priest Fr Patrick Rigney reported that in Philipstown (Daingean), ‘the labourers almost exclusively [depend] upon the potatoes, with buttermilk occasionally; the tradesmen have butter or meat and oatmeal three or four times-a-week’. A common practice among the labouring class was for the family to sow potatoes in the spring time; the father/husband would then leave to seek work in England or Scotland for the summer months, during which time the mother/wife and children would support themselves by begging, travelling beyond their native parish to avoid the shame of alms-seeking; in October the family would be reunited to harvest the potatoes, on which they would survive through the winter months before starting the cycle again in the spring. In Tullamore Dr Wallace told the Poor Inquiry that this practice, which was more common among labourers in western counties, was not frequently resorted to in King’s County: ‘Very few quit their dwellings in this parish’. However, he added, ‘If any married man goes, his wife and children go a begging.’ Dr Wallace estimated that around 200 beggars were to be seen in Tullamore during this period, ‘but many of them come from other places’. From Rev. Crozier in Edenderry we learn more about local labourers’ migrating patterns: ‘Few labourers go from this part of the country. Some however do, who, when wearing of stuff is slack, go to Leeds, Manchester and other manufacturing districts, to get employment.’ It may surprise readers to learn that impoverished peasants could afford to travel to Britain in this period. The advent of steam travel in 1815 greatly facilitated seasonal migration from Ireland to England, Scotland and Wales, and this relatively cheap and quick form of travel opened up increased opportunities for seasonal employment to the rural and urban lower classes in Ireland. Cross-channel tickets could be purchased for as little as five or sixpence in the 1820s and 1830s.

Money was the forms of alms most commonly given by shopkeepers in villages and towns (they actually had cash to hand), while potatoes were given by labourers and small farmers to the wandering beggar at the cabin door. Looking locally, we see that beggars in Tullamore were known to ‘get money, others [got] provisions’; a similar observation was made in Edenderry. This pattern fits in with practices witnessed throughout Ireland in this period, leading the surgeon and polymath Sir William Wilde (1815-76), father of Oscar, to describe the humble tuber, in an 1854 essay on the potato and its significance within Irish society, as ‘the circulating medium for the mendicant’. 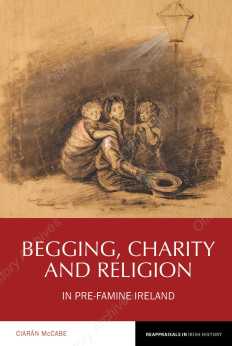 Author bio:
Dr Ciarán McCabe is the author of Begging, Charity and Religion in Pre-Famine Ireland, published in October 2018 by Liverpool University Press. He is an Irish Research Council postdoctoral fellow at the School of History, UCD and his project on working-class women’s survival strategies in late-nineteenth and early-twentieth-century Dublin is associated with the new tenement museum at 14 Henrietta Street. His research interests focus on poverty and welfare in Ireland between 1700 and 2000, and among his current research strands is a comparative study of welfare regimes in nineteenth-century Irish provincial towns. A former journalist, he lives near Mullingar, County Westmeath. He can be contacted at ciaran.mccabe@ucd.ie or @ciaran_dr