Róisin Lambe is the Membership and Events Administrator with the Irish Georgian Society. A Blueball native, she is member of Offaly Historical and Archaeological Society, and has happily agreed to host the Society in the newly refurbished City Assembly House during its summer outing to Dublin on 30 June.

In 1957, Desmond Guinness wrote to the Irish Times to notify them of his intentions to revive the Georgian Society. The original aims were to ‘bring the photographic records up to date, publish further volumes of the Georgian Society books, and fight for the preservation of what is left of Georgian architecture in Ireland.’ Distressed by the neglect of Ireland’s architectural heritage and the demolition of two Georgian townhouses in Kildare Place, Desmond and Mariga Guinness were spurred into action and called interested volunteers together at their home Carton House. The Irish Georgian Society was founded on 21 February 1958. Their first conservation project was the restoration of Conolly Folly which is now the logo of the Irish Georgian Society. Other notable projects include the restoration of Castletown House which was purchased from developers in 1967 and opened to the public in 1968. Castletown House is one of Ireland most significant Palladian mansions. The Society also acted as advocates for built heritage in Dublin. They rallied against the ESB development on Fitzwilliam Street on the so-called ‘Georgian Mile’ which sadly failed and were replaced by modern offices. In 2018, the ESB has announced its plans to restore a neo-Georgian façade. Despite this loss, the Irish Georgian Society managed to save Tailor’s Hall, Roundwood House in County Laois and Damer House in Co. Tipperary which was going to be pulled down by the local council to build swimming pool and a car park.

Desmond Fitzgerald, 29th Knight of Glin, succeeded Desmond Guinness as president of the Irish Georgian Society. Under his guidance the Society continued to flourish and prosper. In particular, he promoted the Irish craftsmanship that is inextricably linked to our heritage and decorative arts. The Irish Georgian Society continues its work today with the support of many individuals. It achieves the aims to conserve and promote Ireland’s architectural heritage and decorative arts by encouraging scholarship through publications such as the annual journal, Irish Architectural and Decorative Studies, running a Conservation Education programme to assist owners and professionals in conserving and restoring their period properties, assisting owners of over 50 properties with our annual Conservation Grants Programme which started in 2008 and the most ambitious project in recent years of restoring the City Assembly House which has just been recently finished.

About the City Assembly House

At the time of its construction the City Assembly House on Dublin’s South William Street constituted a tremendously advanced initiative as it stood as the first purpose built public art gallery in either Britain or Ireland and possibly in Europe. It was built by the Society of Artists in Ireland between 1766 and 1771 with the expressed aim of promoting the work of Irish artists and providing an academy for the arts. Its architect is unknown though the street elevation could be by Oliver Grace who exhibited ‘an elevation, proposed as a front to the Exhibition Room’ with the Society of Artists in 1768.

Then in subsequent years, the building has been occupied and used by various organisations. Some of these include Dublin Corporation who undertook 100 year lease setting up the City Assembly House as an unofficial City Hall. It was at this time that Daniel O’Connell spoke for four hours and ‘delivered a speech, which, even among his, had no superior’. O’Connell is said to have ‘painted a glowing picture of the wealth, peace, and dignity which would accrue to Ireland from the presence of a Parliament in College Green. The building also was home to the Municipal School of Music, now the DIT Conservatory of Music and Drama in the 1890s while in the 1920s the octagonal room housed the outlawed Supreme Court of the Irish Republic and up until 1945 it retained its dais for the Mayoral Bench, a partitioned-off area for parties to actions, and a gallery. In 1952 the Old Dublin Society collaborated with Dublin Corporation in establishing a Civic Museum in the building using as the core of its collection items donated or loaned by its members. Since the time it was conceived and built by the Society of Artists, the City Assembly House has played a central role in the public life of Dublin city whether in promoting the arts, serving as the assembly rooms for Dublin Corporation or being the home of the Old Dublin Society and the Dublin Civic Museum.

In 2013 after negotiations with Dublin City Council, The Irish Georgian Society moved their headquarters to the City Assembly House with an aim to fully restore the building to be a gallery space opened to the public and to enhance the city centre and cultural sector. The Irish Georgian Society raised funds for restoration through public funds from Dublin City Council, the Department of Arts, Heritage and Gaeltacht and the generosity of our members, notably our US Chapters in New York, Palm Beach and Chicago. It was important to the Irish Georgian Society to open the building to the public and accessible for everyone so part of the phase of work was to install a lift for wheelchair users. 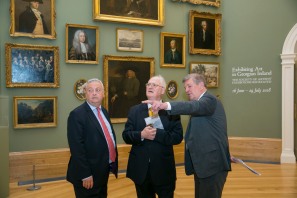 15/06/18 Irish Georgian Society. Former Taoiseach John Bruton launched an exhibition ‘Exhibiting Art in Georgian Ireland’ at the completion of the restoration of the City Assembly House in South William Street. He is guided through the exhibition by Michael Wall, Chairman of the Board IGS and Sir David Davies, President IGS(right). Photo; Johnny Bambury

Restoration and opening of the exhibition space in City Assembly House

About the ‘Exhibiting Art in Georgian Ireland’ (Opened 16 June 2018)

Dublin’s City Assembly House, the first purpose built exhibition gallery in Ireland and Britain launched a summer exhibition Exhibiting Art in Georgian Ireland. Celebrating the building’s original incarnation as the first purpose-built public gallery in Ireland and Britain, constructed by the Society of Artists in Ireland over 250 years ago. This exhibition re-assembles works by Society of Artists members such as Thomas Roberts, Jonathan Fisher, James Forrester, Robert Carver, Robert Healy and Hugh Douglas Hamilton, including many pieces which were first displayed in the building in the series of exhibitions the Society held there between 1766 and 1780. With loans secured from national institutions such as the National Gallery of Ireland, the Royal Irish Academy and private collectors, this exhibition reunites over eighty works by exhibiting Society of Artists’ members. The exhibition evaluates these stimulating years; assessing Ireland’s first introduction to exhibition culture and the significant contribution it made to an increasingly self-confident national school of Irish art. Running for six weeks from Saturday 16 June to Sunday 29 July, the public will have free access to the exhibition, with guided tours and exclusive events to mark the completion of the restoration of the City Assembly House.

With thanks to Róisín Lambe and the Irish Georgian Society for use of images.