An invitation to speak to the Offaly Historical Society on 22 February 2018 caused me to consider whether or not you could tell the history of early medieval Ireland by concentrating on just one county. In the case of Offaly it proved possible.

When written Irish history begins (certainly by the late fifth century) Ireland was a complex patchwork of political units unified by the Celtic language. This Irish speaking culture came to Ireland before 700 along with the use of Iron and other Celtic traditions. A second wave of Celts from central Europe arrived on the island around 300 BC. These were the people that introduced La Tène artistic styles into Ireland.

Much of what we know about these people comes from the discovery of Old Croghan Man in 2003. Found in Offaly near the Meath border, this poor devil was sacrificed sometime around 270 BC. His nipples were sliced as part of the ritual associated with his murder and, tellingly, he wore a bracelet with a La Tène decoration. This is the world that Patrick describes in his Confessio written towards the end of the 400s AD: a world of strange pagan rituals and sun worship.

Patrick is part of the miracle that led to the rapid acceptance of Christianity by the Pagan Celts. But just as important was the economic miracle that accompanied the arrival of Christianity into Ireland. A pollen diagram from Clara Bog shows the end of the ‘Late Iron Age Lull’ around 400AD followed by the creation of pasture, as indicated by the pollen of Plantago Lanceolata. Pasture, which enabled the rearing of cows, formed the foundation of the Irish economy throughout the early Middle Ages. 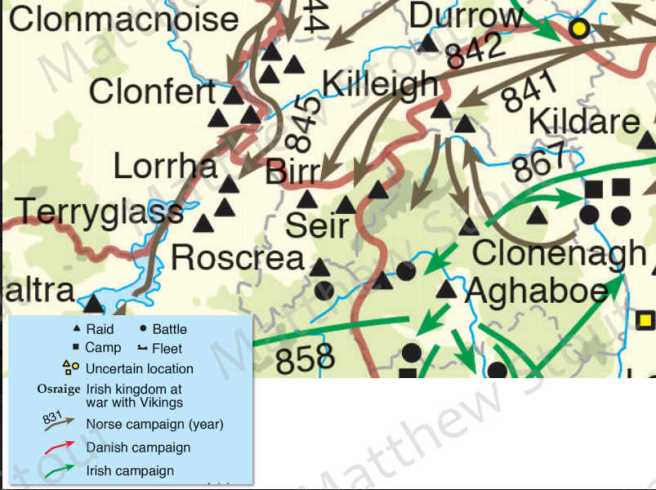 The Irish Church soon developed the confidence that is implicit in the missionary work of Colum Cille and Columbanus. The Book of Durrow, from around 700, illustrates how far the manuscript tradition had progressed in the centuries since the arrival of Christianity (and the written word) into Ireland. The Irish church was extremely self-assured in its own practises. Irish monks wore a different tonsure and practised Easter on the basis of a different set of calculations than the rest of Europe.

Offaly comes to the fore in the early medieval period (always bearing in mind that the concept of ‘Offaly’ would have had no meaning to early medieval people) because it stood on the boundary of four of the five ancient provinces of Ireland. The ‘Easter controversy’ led to the Synod of Mag Léne (near Durrow, Co. Offaly) in 630, where the churches in the south of Ireland acknowledged the orthodox method of calculating Easter. There was a lot of bad feeling over this and Mochuda’s exile from Rahan in 638 is probably due to his falling on the wrong side of the Easter controversy.

Like the synod of Mag Léna, Birr was chosen as the site of a great gathering of kings and ecclesiastics to enact the ‘law of the innocents’ or Cáin Adomnán, an early medieval forerunner of the Geneva convention. It established legal protection for the clergy, for children but especially for women in time of war. Ninety churches and dynasties were represented at this rígdál at Birr in 697.

The laws of Ireland – that were first written down in the seventh century – include the ‘triads’, list of places and norms that are usually in groups of threes. The triads testify to the importance of the midlands, at least in the minds of the legal scholars who compiled these laws. They reveal much about their compilers’ jaundiced perceptions of the more remote parts of the island. But they are enthusiastic about midland churches. The ‘dignity of Ireland’ was said to be Clonmacnoise. The ‘chastity of Ireland’ was Lynally but Lynally was also regarded as one of the ‘three unlucky places of Ireland’. Was it unlucky to be chaste?

Early medieval Irish society at the end of the eighth century was its own complete world. with a profound sense of its own identity. Into that world, in 795, the Vikings arrived and their arrival represented a smashing of the old order. In the first long generation of Viking attacks, the midlands was relatively safe from the marauders who raided from the coasts. But after the establishment of the permanent Viking settlements the midlands suffered terribly. By the end of the ninth century, artistic expression became focussed on the creation of high crosses, where the designs from metal work and the iconography of the illuminated manuscript traditions were translated into stone; more durable and less portable. The post-Viking period also witnessed the beginning of the building of stone churches. The earliest reliably dated standing stone church in Ireland is the ‘cathedral’ of Clonmacnoise, built in 909.

Profound shifts in political power occurred in the tenth century. First, at the beginning of the 900s you had a renewed onslaught of Viking activity. Then you had the career of Brian Boru. Brian was constantly at war and his armies continually passed through the midlands leaving only devastation behind him. The ancient province of Mide (Offaly’s north-western baronies were in that ancient province) took a hammering in that period and the kings of Mide never regained their former power and prestige. By the time we get to the Synod of Ráith Breassail in 1111, the Offaly region and its churches were neglected when the diocesan framework was drawn up. Clonmacnoise was re-established as a diocese in 1152, by which time many of the most important monasteries in Offaly had, in line with faltering twelfth century church reform, become Augustinian monasteries; Clonmacnoise, Gallen, Killeigh, Durrow. This change in designation does not, however, represent a dramatic a break from traditional Church practice. 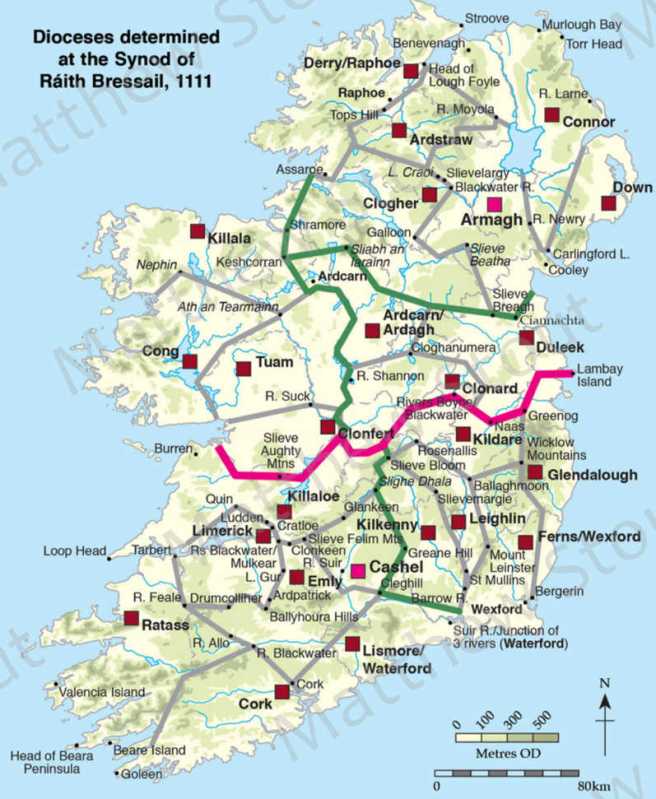 The Anglo-Normans invaded Ireland in 1169 and Hugh de Lacy was killed by a disgruntled Irishman in 1186 at the motte at Durrow. That act represents both the end of early medieval Ireland and the fact that many aspects of early medieval Ireland endured despite the Normans. Society still valued long-established methods of ecclesiastical administration, learning thrived and Irish legal codes were preserved. Ways of life, kingship and economy were little altered outside the zone of Anglo-Norman control. When the colonial enterprise faltered in the fourteenth century, traditional patterns of Irish life, never entirely vanquished, revived in the conquered lands.

Ireland’s early medieval history can be told through the lens of county Offaly because of its central position in Irish history and geography. I wonder could the same be said for any other county in Ireland? More on this subject can be found in Matthew Stout, Early Medieval Ireland 431–1169 (Dublin: Wordwell, 2017).

This book is available from Offaly History Centre, Bury Quay, Tullamore and at the online bookshop at http://www.offalyhistory.com at the price of €35.