Whilst dressing I was startled by a loud yell of terror stricken male and female voices coming – apparently from hall, and ran out to see the cause. My husband was out ahead of me at his heels I passed through corridor of wing and onto the gallery running round two sides of hall. Two lamps on gallery, two more in hall below. On the gallery, leaning with ‘hands’ resting on its rail, I saw the ‘Thing’ – the Elemental and smelt it only too well.

Mildred Henrietta Gordon Dill was born on 13 March 1869 daughter of Dr Richard Augusta Caroline Dill, of Birchwood, Brighton, England.  She was the youngest of six children, educated at Oxford and afterwards set her heart on a literary career and this would be difficult as her parents were Plymouth Brethren and higher education was not allowed for a woman. Before Mildred got engaged she ran off and joined the Salvation Army with the intention of tending to London’s poor. On 6 November 1889 at the age of twenty she married Jonathan Charles Darby, fifteen years her senior, and heir to Leap Castle and the Darby estates in King’s Co/Co. Offaly. Although young and small in stature Mrs Darby would prove to be no shrinking violet of a bride. She was intelligent, outspoken, high spirited and known to ride and shoot as good as any man. Shortly after arriving at Leap she took part in an all ladies cricket match an event most likely instigated by Mrs Darby amongst her new friends and neighbors. She was known for organising amateur theatre in Oxmantown Hall, Birr in aid of the Ormond hunt and received high praise from a reporter in a local paper for her efforts.

‘Thanks to Mrs Darby’s genius the programme was diversified and attractive to a degree seldom met with in provincial towns.’

A less than happy marriage

Their first child, Jonathan, born April 1892 died after just four weeks. The Darbys had four more children born by 1904. Diane 1893, Cicily 1895, Horatio 1898 and Florence born 1904. Mildred and Jonathan’s marriage appears to have run into trouble early. The death of their first child cannot have helped. Jonathan Darby was frequently away and when he did come home Mildred and the children were exposed to outbursts of rage and all the children feared their father. Mildred threw herself into rearing the children and her writings. It is believed that Mildred was writing before she was married but no records can be found.

In 1893 Mildred Darby published the short story A Blank Day with the Ballyblutt Hounds in Outing: Sport, Adventure, Travel, Fiction, under the pen name of Andrew Merry. No other stories were published until 1898, in that year she published seven short stories.

An April Fool: published in the book Eleven under one cover

A Man with No Character

A House of Horrors

The Taking of Ballynagle Tower

The Love of Darby MacCartney

The Folly of Albertina

Between 1901 and 1902 Mildred Darby/Andrew Merry published another nine short stories in the Weekly Irish Times:

A Brush With The Enemy: Why Doolin Fixed His Choice

The End of The Chapter

Murdered: Or the Dart of Fate

The Lilies of The Field: A Tale Of Tea-Gowns

A Bear Hunt in the Rockies: The Tale of A Dog

Another English Woman’s Love Letters: And How They Went Astray

Most of her writings are short stories and her books

Paddy-risky (1903) are a collection of short stories.

Anthropid Apes (1908) is a novel. Mrs. Darby wrote favourable accounts about the tenants in locality at Leap, with a good understanding of their way of life.

The smelling Ghost of Leap

Darby/Merry also wrote stories about the occult and ghosts she believed she experienced at Leap, a horrible grey thing human in shape and unclean with an offensive stench.

Kilman Castle “A House of Horrors” first published in Belgravia: a London Magazine 1898 but there is no doubt that it is a cover for the Leap. A much longer and more detailed account of the elemental and the happenings at Leap was published in The Occult Review, December, 1908. 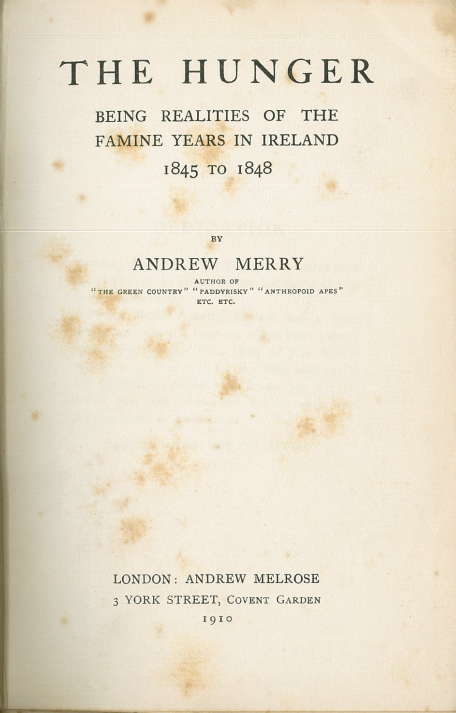 The Hunger and Famine times in the Leap Castle area

The book The Hunger was originally published as The Pale Horse in the Freeman’s Journal as a short story. The Hunger was published by A. Melrose, London 1910.  This book although a novel dealt with the harsh realities of the Famine in Ireland (1845-9). It is taken from eye-witness accounts of the happenings around Leap at this time. The story put the landed gentry in a poor light in the way the treated the Irish tenantry during the famine years. Her husband Jonathan Darby always frowned on her writings and after the The Hunger was published he forbade her to publish any more stories. A short while later while galloping around Birr with her ponies she fell off her carriage and was in a coma for three weeks. She never fully recovered from this fall. The Hunger was the last of her writings to be published and is too day very rare and sought after. Offaly History acquired a copy for its library last year and cheap off prints are now also available.

Leap Castle destroyed in 1922 and happily once again occupied

Burning of Leap Castle during the War of Independence

In 1922 during the War of Independence Leap Castle was looted and burned to the ground. Jonathan and Mildred Darby had moved away from the castle for a period before the burning because of all the intimidation they received during the 1919-21 period. They had got word that the castle might be burned and Jonathan moved his books and valuables to a safe house nearby. However, Mildred’s possessions were still in the castle. Her clothes, jewellery, all her writings and books including a large collection of her unpublished stories and books were also destroyed. In giving evidence for the compensation claims hearings Mrs Darby said that over one hundred and fifty short stories and two complete novels were gone, representing over thirty years of work destroyed. Her husband had forbidden her to publish but she continued to write.

After the burning Mrs Darby and her husband went back and forth between Ireland and England for a time until all compensation claims were dealt with. Afterwards they went their separate ways. Mildred Darby moved back to England where she died on 5 January 1932 in Brighton and is buried there. Her husband Jonathan lived in Killiney Dublin.  He died in 1943 and is buried in Aghancon.

Offaly History first visited Leap Castle about 1974. During the tour we saw the famous ‘murder hole’. It was said at the time that Darby family members were particularly affected by the ‘smelling ghost’. On that day a Mrs Wellman (a Darby relationship) took ill during the tour and it thought to be connected with the family’s affliction when it came to the Leap Castle ghost.

Rex Ingram, Hollywood director much influenced by the ghost of Leap

One who may have been much influenced by the Leap Castle ghost was the Kinnitty man and Hollywood director, Rex Ingram (Hitchcock), His biographer Ruth Barton  in her book and in her article for Offaly History 8 (2015, pp 129-44) tells the story:

[Mrs Darby’s] range ran from light society fripperies, to murder mysteries, to historical melodramas such as ‘The True Story of an Irishwoman’s Experience in the Zulu War’ (The Weekly Irish Times, 21 December 1901), the Irishwoman in this case allegedly being her cousin. In 1900, she published The Naked Truth and in 1902, The Green Country. These were followed by Paddy-Risky: Irish Realities of To-day (1903), Anthropoid Apes. A modern novel (1909); The Hunger: being realities of the famine years in Ireland, 1845 to 1848 (1910). Between these novels and collections of stories, she also published stories in the Occult Review. One of these, ‘Kilman Castle: The House of Horror’, very evidently draws on Leap Castle, even if it is now relocated to the North West of Ireland and inhabited by the O’Connells. Kilman Castle is home to an unholy, festering apparition referred to only as ‘the Elemental’, which appears at night to unsuspecting guests and terrifies domestic staff and household pets alike. Writing a private letter to a Mr Carroll, Darby describes the same apparition in very similar terms:

Whilst dressing I was startled by a loud yell of terror stricken male and female voices coming – apparently from hall, and ran out to see the cause. My husband was out ahead of me at his heels I passed through corridor of wing and onto the gallery running round two sides of hall. Two lamps on gallery, two more in hall below. On the gallery, leaning with ‘hands’ resting on its rail, I saw the ‘Thing’ – the Elemental and smelt it only too well. At the same time, my husband pulled up sharply about 10 feet from the Thing, and half-turning let fly a volley of abuse at me ending up ‘Dressing up a thing like that to try and scare the fools of women and servants – to try and make a fool of me.’[i]

The letter reveals not only Mildred Darby’s belief in the supernatural but her husband’s dismissal of such beliefs. Other letters clearly indicate that there was little love lost between the two and Mildred evidently did not share Jonathan Darby’s strict Orange Unionist beliefs. …..

The two Hitchcock boys were frequent visitors to Leap Castle and Rex was much taken by his host’s blood-curdling ghost stories. At the same time, as he recalls in his own diaries, he was absorbed in local life, following the stories of horrible murders and learning folk remedies and other superstitions.[ii] It should not come as any surprise then that Rex would himself turn to supernatural events and mystical apparitions when he came to make his own films. However, Celtic tales and Gothic gore were not the only influences on the two young boys.

[i] Letter from Mildred to Darby to Mr. Carroll. 15 February. National Library of Ireland, Ms. 17,877. I have retained the somewhat idiosyncratic turn of phrase in the letter. Published works do not reflect this style. For more on Mildred Darby at Leap Castle, see Andrew Tierney, ‘The Gothic and the Gaelic: Exploring the Place of Castles in Ireland’s Celtic Revival’, International Journal of Historical Archaeology, Vol. 8, No. 3, September 2004, pp. 185-98.

Leap castle: a place and its people by Marigold Freeman-Attwood was published in 2001 by Michael Russell (Publishing) Ltd. Wilby Hall, Wilby Norwich, England. Marigold Freeman-Attwood is the granddaughter of Jonathan Charles Darby JP who was High Sheriff of King’s County in 1893. The Darby family were owners of Leap castle and its estate of about five thousand acres for nearly three hundred years. See illustration of jacket above.