For years workers at the Salts factory in Tullamore, formerly Tullamore Gaol, spoke of the ghost of Mary Daly haunting the building. Margaret Mulligan, head researcher at Offaly History, recounts the tale of the last woman to be executed at Tullamore for the murder of her husband, John Daly.

Mrs. Mary Daly was the last woman executed at Tullamore on 10th January 1903, for complicity in the murder of her husband John Daly of Clonbrock, Doonone, Co. Laois. She was the second last woman to be hanged in Ireland. Until the early nineteenth century those convicted of most felonies were liable to be executed, and serious crimes such as robbery, rape and murder, received the death penalty.  Mary Daly suffered the extreme penalty of the law, as it was alleged she was involved in a conspiracy in which she was the principal participator.  She is still prominent in the folk memories of Tullamore town. Joseph Taylor was also executed for the murder of John Daly on 7th January 1903.

Mary Daly was christened Bridget Mary Byrne on the 14th May 1865. She was the daughter of James Byrne and Elizabeth Kelly, in the townland of Mayo, Doonane, Queens County. She had four brothers and four sisters. John Daly, her husband, was christened on 9 August 1863 in the townland of Crettyard, Queens County.  He was the son of John Daly and Elizabeth Whelan, Crettyard. John Daly and Mary Byrne married in 1890. They had two children, John, baptised on 24 October 1891 and Elizabeth in 1893. The Daly family lived on a five-acre farm in the quiet country district on the borders of Queens County, adjoining the main road leading from Carlow to Castlecomer, through the colliery district. John Daly’s occupation was a coal-carrier, engaged in a quarry near Clonbrock – an occupation which kept him away from home a good deal, going out with his horse and cart every day selling “breakages” in Carlow and elsewhere. He was so engaged on the evening he lost his life.

Joseph Taylor was born in 1877 in Doonane, Queens County.  He was the son of Anne Taylor. The Taylor family were of the Church of Ireland religion. Joseph Taylor had a brother William, born in 1871, a sister born in 1882 and a brother born in 1884.    In the late nineteenth century Joseph Taylor was unmarried, and lived with his mother, brother and sister on a farm between 250 and 300 yards from the house occupied by the Dalys. For a considerable time Taylor’s relationship with the Daly family had been giving rise to a good deal of gossip in the locality, and it would also seem that the murdered man and his wife lived unhappily together. On one occasion Mrs. Daly left her home, taking two cows, which she sold in a neighbouring town. She visited Carlow with her two children, and was seen with Joseph Taylor while there.

After remaining in Carlow for some time, she left for Castlecomer, where Taylor again joined her, both of them being found in a disused house a short distance from the town. John Daly made some complaints to the police that his wife was missing, and after some negotiations she returned to her home. Events seem to have taken a peculiar turn  on the 9th May 1902 when Taylor visited Daly’s house and, it is alleged, made a savage attack on Mrs. Daly, striking her on the head with a hatchet. Taylor was arrested and Mrs. Daly’s statement was taken. Joseph Taylor was prosecuted at Ballickmoyler Petty Sessions. Some difficulty was met with in court, as Mrs. Daly at this time could not be found. Taylor was, however, remanded for trial to the next Maryborough Quarter Session, and was admitted to bail.

On Tuesday 17th June 1902 John Daly went to Carlow to deliver a load of culm at Killery. Culm was derived from the fine dusty or gritty material from the anthracite coalfields. When he returned to his residence at Clonbrock he unyoked and put out the horse in the field at the rear of his house. Mrs. Daly stated:

‘I remained up to eleven o’clock awaiting his return, and then I went to bed, and slept so soundly that I did not hear my husband’s arrival. I got up at seven o’clock and saw the horse and cart in its usual position. Later on I called my son to go for his father. He returned alone and again went out on the same errand by another way, over a stile. He came running back and said his father was lying in the field, and then I and my son proceeded to the spot where my husband lay dead’.

Some delay occurred before the police at Doonane barrack were informed. When they arrived, John Daly was found in a field, with the back of his head in a pool of blood. There were some marks of a struggle about, and from where the dead man lay there was another pool of blood a yard or so distant. There was a dangerous wound over the right temple and under the left eye and the back of his head was perforated all over by some sharp instrument. A fork with blood marks on it was found in the house and further near the body, a portion of a broken fork was found, whilst the missing or detached portion was found near a stream half way between the scene of the murder and Taylor’s house. There were also blood marks on the second fork.

Sergeant Donlon from Doonane Barracks went to the scene and subsequently discovered the body of John Daly lying in a field seventy-five to eighty yards from the rear of Daly’s house. The body of the deceased had wounds to the head.16 About ten yards from the body was a large clot of blood and near it a portion of a fork, covered in blood. Deceased had his hand on a bridle or winkers, which showed that he was in the act of letting out his horse at the time he met his end. The deceased was cold and stiff.  Sergeant Donlon proceeded to the Daly’s residence and behind the door he found a fork with the prongs broken off it, marked with blood. The missing part of the fork was found some time later near a stream half way between the scene of murder and Taylor’s house, and there was also blood marks found on this portion of the fork.

Shortly before three o’clock on Wednesday, Dr. Higgins, County Coroner, arrived on the scene of the occurrence, to hold an inquest into the murder of John Daly. The following jury was sworn: William Gorman (foreman) George Smyth, Thomas Duggan, M. Whelan, Isaac Langrel, James Dynam. Thomas Graham, Daniel King, Thomas Warde, Thomas Willoughby, W.P. Delaney and T. Ruskin. Immediately after viewing the body the jury proceeded to Crettyard Stores, where the inquest was held. Mr. Greer, D.I. watched the proceedings on behalf of the police. The children of the murdered man were present, but showed no sense of the awful calamity that  had happened to them.

Joseph Taylor was arrested on 19th June 1902 and was detained in Doonane Barracks. The accused was not professionally represented. He displayed no signs of emotion when the charge of having wilfully murdered John Daly was read out to him by Mr. G. Taylor, C.P.S., Ballickmoyler, who took the depositions. Mr. Greer conducted the proceedings on behalf of the Crown.

On Tuesday evening, 24th June 1902, Mrs. Daly was arrested by District Inspector Greer, Ballylinan, on the capital charge. She was brought to Doonane barracks, where she was detained overnight and on Wednesday 25th June 1902 at eleven o’clock, she was brought before a special court in Ballickmoyler and charged together with Joseph Taylor, who was brought up on remand.

On 23rd July 1902, both Joseph Taylor and Mary Daly were charged with the murder of John Daly and were both brought up at Ballickmoyler. John Daly, a boy of eleven years and the son of John & Mary Daly, was the first witness to gave evidence. He stated:

‘Taylor was in my father’s house on the day of the murder talking in a low tone to my mother. Me and my sister Lizzie went to bed at half past nine, but I woke up when I heard shouting in the yard. We got out of bed, and went to the yard, where I saw Joseph Taylor and my mother. Joseph Taylor was ‘boxing’ and kicking my father, who was lying on the ground imploring him ‘to leave him his life’. This continued for about fifteen minutes, when Taylor dragged him over a stile into the garden, and I then heard a jingle of a sprong, which they were ‘belting’ him with.  Me and my sister were ordered by my mother to go to bed.’

Under cross-examination, however, it turned out that the boy had made several conflicting statements to the police, the first being that he saw nothing. 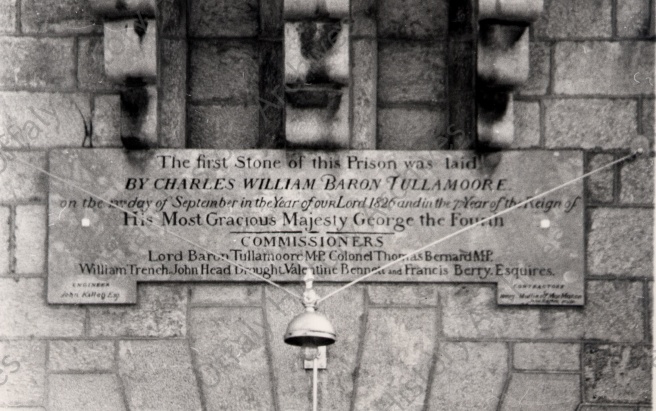 Doctor J. S. Lane, Ballickmoyler conducted the post mortem on the body of John Daly, and was assisted by Dr. M. Kenna, Ballylinan. Both doctors discovered that on the face of the body there was a deep incised wound beneath the left eye, one inch in length. Immediately above the left eye there was another incised wound an inch and a half in length and half an inch in width. There were three wounds on the forehead, one contused and two lacerated. On the left side of the head there were four lacerated wounds. All these wounds penetrated to the bone of the skull.  There was an effusion of blood into the membranes and substances of the brain. There was no fracture of the skull. Death was caused by shock and effusion of blood on the brain.  The wound might have been caused by a heavy instrument used with a considerable amount of force.

The story concludes next week with the trial and execution of Mary Daly and Joseph Taylor.

See Margaret White, ‘The Clonbrock Murder’ in Offaly Heritage, Vol 2. (Esker Press, 2009) for a full version of this article with extensive bibliography and sources.

Featured image: Lithograph of Ellen Byrne at her arraignment for the murder of her husband, Augustine, 1842. Courtesy National Library of Ireland, EP BYRNE-EL (1) II.